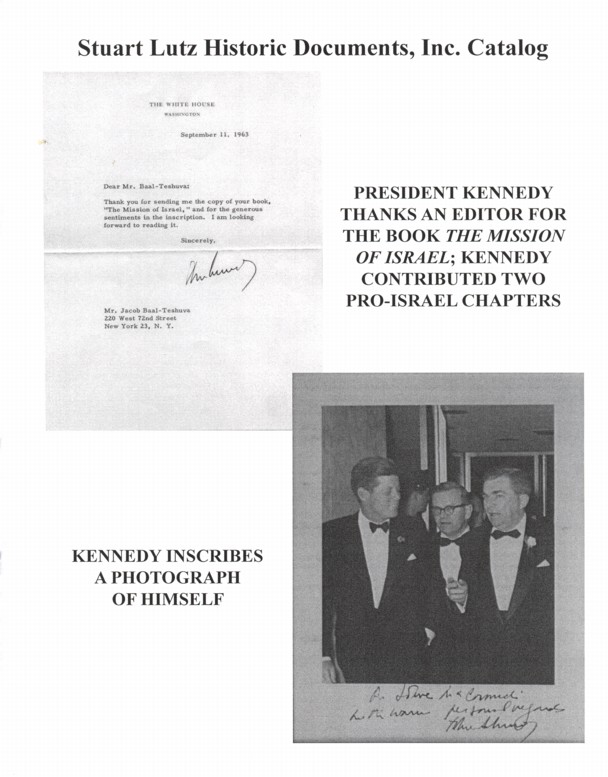 Stuart Lutz Historic Documents has issued a "highlights catalog," one that includes some of their most intriguing new acquisitions. In keeping with the changing times, they've limited the catalogue to the "highlights," while the complete listing of available items, along with color photographs, are available as a download from their website. Still, the printed edition affords a look at a few of the new signed documents, and provides a persuasive invitation to visit the website for more. Here are some samples of what is now available.

Displayed on the cover is a letter from President John F. Kennedy, written a little over two months before he was assassinated, to author Jacob Baal-Teshuva. Baal-Teshuva had compiled a book of essays titled The Mission of Israel. This was a book of essays in support of the State of Israel, with notable figures such as Lyndon Johnson and Eleanor Roosevelt offering contributions. President Kennedy was among the contributors. He wrote that the survival and success of Israel was essential and that there was no real conflict between the aspirations of the Israelis and those of the Arabs. In his letter to Baal-Teshuva, Kennedy thanks him for sending a copy of the book and states that he looks forward to reading it. Priced at $5,000.

Here is a most entertaining "Dear Jane" letter from one Loring Barker to his sweetheart no more, a Betsey Torrey, in 1792. Barker considers himself a complete cad for his actions in marrying another. Writes Barker, "This is to inform you that there was such a person as Loring Barker and I am very sorry you ever knew there was such a person." He later adds, "...there is not a more miserable creature living than I am," a sentiment probably shared by Miss Betsey. However, a few other lines in the letter indicate that Betsey perhaps overplayed the hard-to-get hand, or maybe she was just thankful Barker elected to marry Polly Ross instead. He notes that Betsey had many times told him she wished to live a single life (doubtful), that she deserved someone better than he (possible), and that she had rejected his previous overtures. In what one suspects is a bit of an ingenuous though very polite excuse, Barker claims, "I have often been told that Miss Torrey was too worthy a person for me to have, and have taken it into consideration and think so myself." I'll bet Polly Ross must have appreciated that! From what we can tell, Barker and Miss Ross were married in 1791, but it was not until June 12 of the following year that he got around to telling poor Betsey. In the letter, Barker speaks of all of this happening after he left Pembroke. He evidently returned, since Barker is buried in Pembroke, Massachusetts. Perhaps it was in anticipation of his return that he wrote this belated "Dear Jane" letter. Oddly, it appears that Elizabeth Torrey was married in November of 1792 in Pembroke to one Isaac Bowen Barker. Whether Loring Barker and Isaac Barker were related is unclear, but probably not closely if so. Loring lived until 1848, Betsey until 1851. $300.