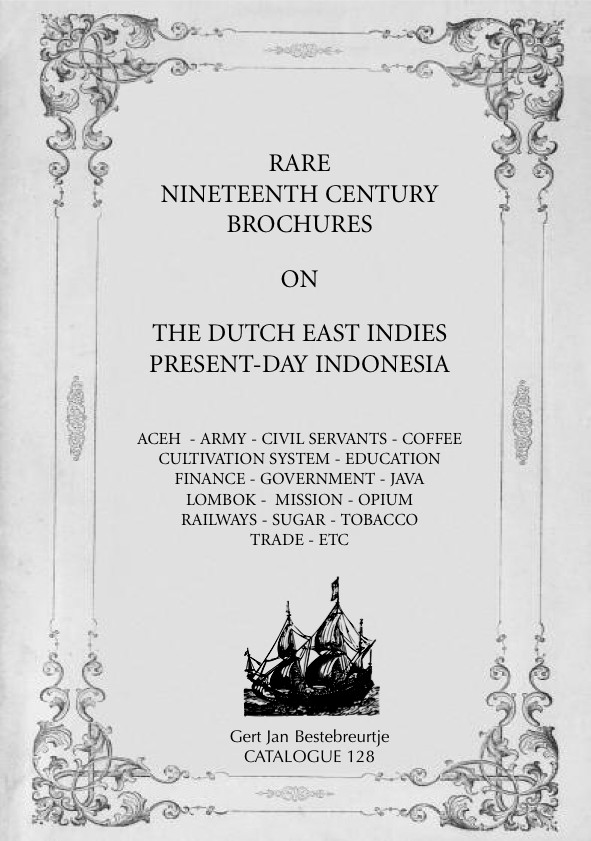 The latest catalogue from Gert Jan Bestebreurtje is entitled Rare Nineteenth Century Brochures in the Dutch East Indies Present-Day Indonesia. The Dutch controlled Indonesia until the Second World War, which began the rapid dismantling of the old colonial system. Since Indonesia was part of the Dutch empire, it is not surprising that a Dutch bookseller such as Bestebreurtje would have access to this material. Most of these brochures were gathered by a Dutch collector during the first half of the twentieth century. However, the items themselves are from the nineteenth century. Among the subjects covered are: the Cultivation System, compulsory labor, budgetary surplus, administration, navy and army, the missionary society, church and Islam, railways, the Aceh war, opium, sugar, tobacco, rice, tin and coal. Authors include statesmen and political leaders, businessmen, entrepreneurs, journalists, and others involved with the area. The language of the pamphlets is Dutch. Here is a quick sampling of the type of material available.

Item 4 is one of many works on Cultuurstelsel or the Cultivation System (or Forced Cultivation). Losing money on its East Indian colony in 1830, the Dutch instituted a system which required that one-fifth of crops grown in the colony be produced for export. The financial benefits to the Netherlands were enormous. Not only did it erase their colonial deficits, it created great surpluses which were used to pay for projects at home, such as railroads, and to deal with colonial expenses in other lands. It also was beneficial to the wealthier natives who knew how to play the system. However, for the poor farmers, it generally meant more work, and at times food shortages as land was transferred from rice to export production. Eventually reports of its impact on the poor farmers led to the gradual dismantling of the system through the second half of the 19th century. This item was written by Hieronymus van Alphen, two volumes from 1869-70. Priced at €225 (Euros, or roughly $300 in U.S. dollars).

Items 7-9 pertain to Jacobus Johannes van Angelbeek. He was serving on the High Court of the Dutch East Indies when he refused to sign a death warrant. The result was he was sent back to Holland on "sick leave." Priced at €225 each (US $300).

Item 117 by Sebastiaan Nederburgh (1889) discusses means of reducing the opium trade on Java. Opium was unfortunately a major income producer for the East Indies. €65 (US $87).