Unusual Books on the West from Gene W. Baade 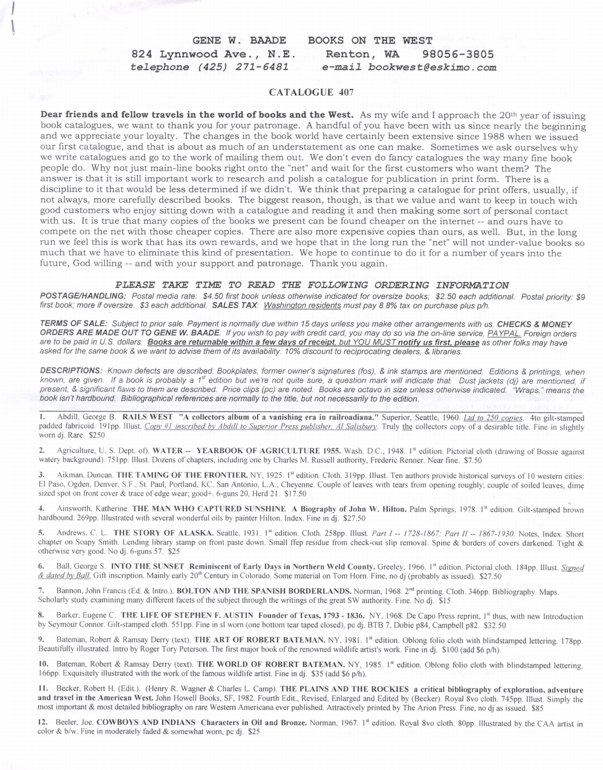 Unusual Books on the West from Gene W. Baade

Gene W. Baade opens his Catalogue 407 of Books On The West with an introspective question, why even bother printing catalogues in the era of the internet? He notes that his catalogues are not "fancy," which they certainly are not, but the plus side of this is that the cost of expensive catalogues is not built into his prices either. He concludes that the printed catalogue is still important because it requires a higher level of research and description to create a useful one than is often found with internet listings. Even more important, in the impersonal world of internet sales, a catalogue still allows a bookseller to connect with his or her customers. The collector can still sit back and read the catalogue at leisure and then speak to the bookseller person to person, as if they were humans rather than machines. Maybe he's on to something!

Catalogue 407 is typical of Baade's catalogues, filled with the unusual, some for collecting, others for reading. They are almost all "Books on the West" with an occasional exception. Prices are rarely expensive. A few items are valued in the hundreds of dollars, but then there are some in single digits. For most items, expect two digits before the decimal point. Here are a few samples from this latest collection.

Item 148 is an item of early Texana, though it was written by a New York lawyer and published in New York: Thoughts on the Proposed Annexation of Texas to the United States. This was originally published in the New York Evening Post under the name of "Veto," but the writer of this 1844 pamphlet was one Theodore Sedgwick. Sedgwick was strongly opposed to annexation, citing constitutional grounds, though his evident major concerns dealt with the issue of slave versus free states and conflicts it might arouse with Mexico. Ultimately, he proved right about these concerns, as the U.S. would go to war with Mexico and the issue of slave versus free new states would be the major cause of the Civil War. However, with the election of the expansionist James Knox Polk as president that same year, Sedgwick's warnings would be ignored. Priced at $135.

Speaking of President Polk, item 132 is The Road to Virginia City. The Diary of James Knox Polk Miller. This is a first edition of a book not published until 1960, but which tells of a man who crossed the country overland in the days before the transcontinental railroad and ended up in Montana in 1864. It's obvious his parents must have been admirers of President James Knox Polk. I wonder how long it has been now since someone was named for him? $19.50.