Autographs from the Arts, Science, Politics, etc. From David Schulson 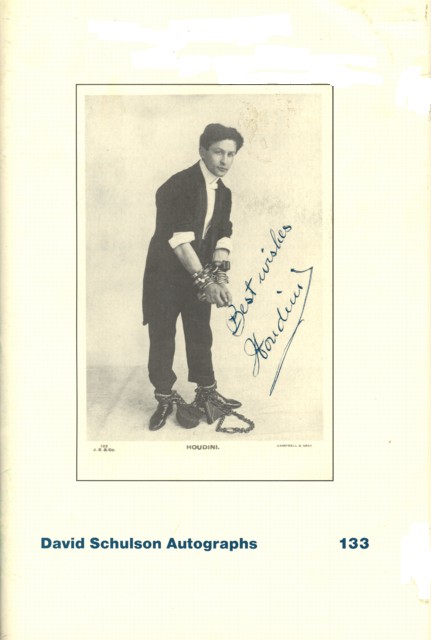 Autographs from the Arts, Science, Politics, etc. From David Schulson

Recently discovered in our mailbox was Catalogue 133 from David Schulson Autographs. Schulson offers a nice mix of autographed documents, letters, and photographs, from both Europe and America. There is a particularly large concentration from persons in the arts - musicians, writers, artists, and actors. However, those who collect signatures of political leaders, scientists, inventors, or even a woman "known by her husbands and lovers" (Alma Mahler) will find items of interest. Here are a few samples of what we found in this most recent Schulson catalogue.

Item 47 is pictured on the cover of this catalogue. It is a young-looking Harry Houdini (birth name Erich Weiss), a Hungarian born American immigrant who became the greatest escape artist of all time. His ability to escape from chains, shackles, and all other sorts of restraints is still legendary, though he has been gone for over 80 years. Offered is a postcard of the magician with arms and legs shackled together. It is signed, "Best wishes, Houdini." It is believed to have been printed around 1905, when Houdini was approximately 30. Priced at $3,500.

Jacqueline Bouvier Kennedy fascinated and charmed a nation as its first lady, but once upon a time, she too was a giddy high school girl. At some point in the mid-1940s, when she was between the ages of 15 and 17, she penned this letter to "Woodley," a friend at Miss Porter's School in Connecticut. In a perhaps startling joke for the time, she writes, "At that cocktail party Nicky said you were a wonderful girl & I agreed so heartily I'm sure he thought I was a Lesbian!" The rest of the time, Miss Bouvier notes, they talked about French Vichy leader Petain. "I tried to look intelligent & nod at the right intervals -- I know I'm no authority on anything -- but he sounded like a little boy who's just read a big book & is having a lovely time expounding it all to a little country urchin without really knowing what it was all about..." She then says she is going to a football game with John (presumably not Kennedy), but that Buddy will be there without a girl. She admits to being ashamed she likes Buddy: "Its all physical -- but no one else can see it at all & looks at me as though I'm insane or have queer glands & I'm beginning to think so myself!" She concludes, "Neither of them have kissed me - I'd upchuck if John did - & love it if Buddy did except I wouldn't let him the 1st time." I'll bet John had a wonderful time at that football game. Item 50. $3,850.

Johannes Brahms was one of the greatest composers, but music isn't all he wrote. Here he writes a letter to music critic and biographer Max Kalbeck, who wrote an eight-volume biography of him. Brahms states (in German) that he was looking forward to welcoming in the winter's festivities with "Mr. K.," "but the ghastly weather and dampness make it impossible for me to attend..." The letter is undated, but would have been late 19th century. Item 11. $3,400.