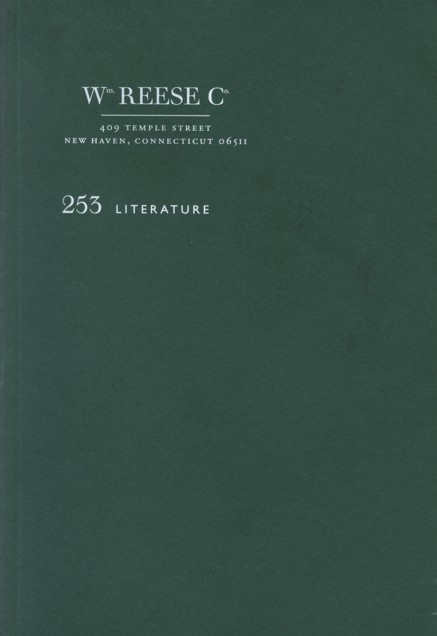 The William Reese Company takes a brief respite from its usual catalogues in Americana to offer Literature A Miscellany, number 253 in their series. This catalogue is descriptively subtitled A varied selection from the 16th through the 21st Centuries including Recent Acquisitions, Poetry and Prose, Manuscripts, Fine Printing, Filmscripts and Bibliography. The nice thing about lengthy, descriptive subtitles is they save the reviewer from having to describe the catalogue. So, we will proceed directly to some examples, stopping only to say that there are almost 800 items offered for sale, and those who might be intimidated by the cost of Reese's typical Americana offerings need feel no fear. Their literary works are accessible to a far wider range of budgets, most likely yours included.

We're so used to Reese's focus on Americana that we will start with an item that straddles the line between literature and Americana. Item 56 is The Vision of Columbus; A Poem in Nine Books. Joel Barlow's creation was published in 1787, and was evidently quite a favorite among American patriots. Among the list of subscribers were Washington, for twenty copies, Lafayette and Franklin for ten each. This copy has an ownership inscription from Charles Pinckney, South Carolina delegate to the U.S. Constitutional Convention, and one of its more influential leaders. He would lead the fight for ratification in South Carolina, and go on to serve as that state's governor and senator and a campaign leader for Jefferson in the 1800 election, a political leader until ill health forced his retirement in 1821. Priced at $1,250.

Item 184 is a signed, typed letter from Hollywood's dearest mommy, Joan Crawford. The chatty Ms. Crawford writes to the recently married screenwriter Frank Nugent and his wife Jean in 1953, "Aw, gee, Jean -- how did you beat me to it? I asked him to marry me publicly...but I didn't get anywhere." Don't feel too sad for Joan for missing out on this man. She still managed to snare five husbands of her own. $275.

Speaking of the silver screen, item 313 is Bruce Friedman's screenplay for Detroit Abe, circa 1981-2. This is a "first" draft signed by Friedman. In 1983, it would be released as the movie "Dr. Detroit," starring Dan Aykroyd. This is positively one of the worst movies ever created, and established the oft-repeated universal truth that ex-Saturday Night Live performers should not be permitted to make movies. $75.

Now for some more memorable performances from the little screen. Item 76 is an episode from Star Trek's first season, What Are Little Girls Made Of? This is a "revised final" edition of Robert Bloch's script that first aired on October 20, 1966. We cannot say how many times it has aired since, but likely as many times as there are stars in the universe. Forty years later, you still can't go through a day without seeing some advertisement on TV with William Shatner and Leonard Nimoy, so lasting is the influence of this series. $200.