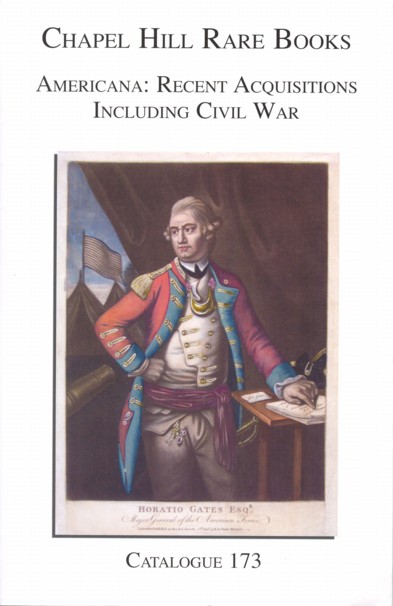 Just arrived is the latest from Chapel Hill Rare Books: Americana: Recent Acquisitions Including Civil War. While the most recent previous catalogues from Chapel Hill were focused on Civil War items from the Confederate side, this is a more balanced presentation. Not only are there Union items from the Civil War, but material that extends far beyond that sad confrontation. There are books, quite literally, from Maine to California this time. We can only mention a few, but anyone who collects antiquarian Americana can expect to find something to their liking in this catalogue.

For those who think politics are rough today, there may not have been anything quite like the campaign of 1828. Andrew Jackson was a man of fanatical supporters, and equally rabid enemies. Jackson was an old soldier, and there were rumors that he might have summarily executed a few prisoners along the way. His enemies played on these to publish what were known as "coffin handbills" (or broadsides), so known because they featured depictions of coffins of people Jackson had supposedly killed. Item 136 is a particularly incendiary broadside, headed An Account of Some of the Bloody Deeds of General Jackson. It includes several vignettes of Ol' Hickory. One shows six blindfolded men, standing in front of six coffins, while nine riflemen take aim. In another, three rifleman prepare to execute another standing in front of his coffin. General Jackson is depicted behind them saying, "Blow ten balls thru thee d___d rascal." Meanwhile, the poor victim cries out, "O God!! My poor mother." In a third woodcut, Jackson shoots an unarmed man, Charles Dickinson, while exclaiming, "I'll have your heart's blood." The broadside goes on to describe several more comparably heinous acts by the General, but all for naught. Jackson won the election by an overwhelming margin. Priced at $8,750.

Item 74 provides a testament of what war is really like. It is a Civil War broadside from ironically named Uniontown, Alabama, by a writer identified only as "C," but based on a similar item, likely Captain Richard Clarke, a 47-year-old physician who joined the Confederate Army to provide assistance to the soldiers. He had just witnessed the first Battle of Manassas (or Bull Run), a stunning victory for the Confederates. Nevertheless, all was not joy behind Southern lines. Writes "C," "Merciful God! What a sickening sight… Wagons & ambulances filled with mangled and groaning men; corpses carried on litters and shoulders of surviving comrades; heaps of legs and arms, recently cut off by the surgeon; brains and blood scattered over the ground, and trodden into the mire… All this I saw!" Clarke left the service the following year because of his age. This extremely rare broadside is an unusual 5" x 20" in size due to the paper shortage. It is offered with a second broadside from Clarke. $2,850.