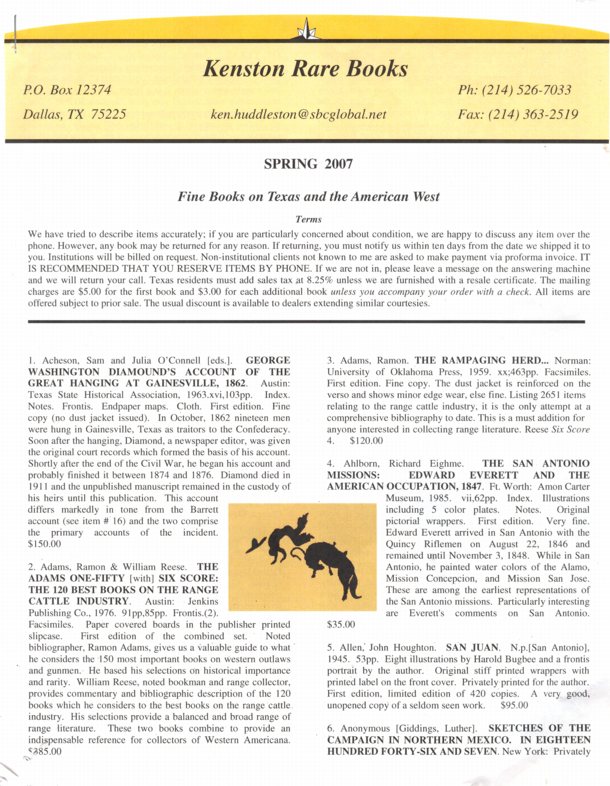 This is our first catalogue from Kenston Rare Books of Dallas, Texas. It isn't hard to guess what type of books a Dallas bookseller would be likely to carry. This is their Spring 2007 catalogue, and the title is Fine Books on Texas and the American West. This is a catalogue that will excite any collector of Texiana or the West. It is filled with material you will want to read as well as collect, stories of cattlemen, rustlers, thieves, lawmen, Indians, settlers, and other extraordinary people. There are books on notable events in Texas history, from the Revolution to the Mexican War, to more recent times.

There are also many local, particularly county histories among the 322 items. We will describe a few of the books which likely have broader appeal, but if your collecting is focused on a particular corner of Texas, you should check out this catalogue. It may have you covered.

Item 203 is one of the earliest travel accounts of Texas written in English, Trip to the West and Texas... Amos Parker traveled from New England to Texas in the days before the Texas Revolution. He journeyed across the Great Lakes to Chicago, down the Mississippi, and then overland to the Colorado River in central Texas. He describes the land and its settlements, and the cultural conflicts with Mexico that would soon lead to the Revolution. He then retreated to New Orleans in early 1835, from which he returned to New England by steamer. His book was published later that year. Priced at $750.

Item 190 is another early book about Texas, although this one moves a few years forward to the republic period: History of the Revolution in Texas, Particularly of the War of 1835 & 36... by Chester Newell. This book is filled with historical information and physical descriptions and data about the area. Newell was not himself a Texan, but gathered his information through thorough research of books about Texas, official documents, and other information obtained from public officials such as Sam Houston. $2,000.

Here is a 1919 pamphlet concerning a technological problem that sounds odd today. The piece is Investigations in Adapting the Automobile to Accurate Soil Survey and Road Traverse Work, published by the Agricultural and Mechanical College of Texas (today better known and Texas A&M). As Kenston explains the issue, in the old days, surveyors measured distances by placing counters on the axles of horse drawn buggies. The circumference of the wheel was such that 500 revolutions came to exactly one mile. However, in 1919, the bulletin points out, "field men have found it increasingly difficult to secure livery accommodations in all parts of the country, due to the fact that the automobile has so largely taken the place of the horse in local and short distance driving." Evidently those automobiles were not yet equipped with odometers. Item 42. $40.