Antiquarian Books from the 15th-17th Century from Milou Rare Books 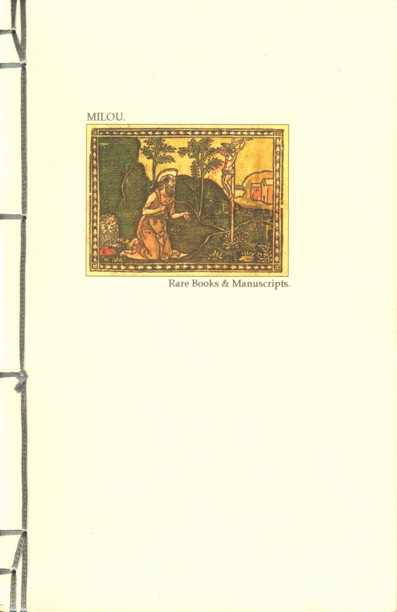 Antiquarian Books from the 15th-17th Century from Milou Rare Books

This month we review our first catalogue from William S. Cotter's Milou Rare Books of Austin, Texas. The title of this catalogue, which describes completely the material within, is 15th-17th Century Manuscripts and Printed Books. It is a collection of 47 rare European texts, in various languages, and covering a variety of subjects. There is not too much deliberate fiction, although the various 15-17th century medical works have some enormous accuracy problems. Those who fear doctors today should be thankful they did not live in this period.

Before looking inside the pages, we need to comment on the binding. I lack the knowledge to describe matters pertaining to the art of the book, but as you can see from the image of the cover (click on it to enlarge), this is an uncommon style of sewn binding rarely seen today. The pages are of I know not what paper, but again, this is not something often seen. This is one of those rare catalogues that should be collected itself. Perhaps this fine presentation can be explained by Milou's describing the firm as a "rare book and restoration concern." Now for a look inside.

Item 27 is one of the great classics of English history, a 1580 second edition of the three-volume Chronicles by Raphael Holinshed. Holinshed was assigned the task of compiling a complete record of human history, and while he never achieved anything quite so great, he provided one of the better histories of early England, Scotland and Ireland. However, what makes his work even more notable, particularly the second edition, is that it was the history that Shakespeare used as the basis for many of his plays. Priced at $16,000.

Item 7 consists of two books (bound together) from 1693 concerning French diviner Jacques Aymar (generally known as just "Aymar"). Along with some of the more common uses for the divining rod, Aymar claimed he could find murderers and other evidence of crime through his stick. Upon finding the crime scene, it would shake violently in Aymar's hands. These two works are Histoire de la Baguette de Jacques Aimar by Pierre Garnier, and Lettre Touchant L'Assassinat by Monsieur Chauvin. They basically attempt to explain the phenomenon through natural means. The theory was that the criminal's body left behind tiny "corpuscles" when it was in an aroused state caused by his nefarious behavior. When the crime scene was found, these corpuscles entered the diviner's body, fermenting in his bloodstream and causing him to shake violently. The reaction, then, was in the diviner's body, not the rod. While this theory has no followers of which I am aware today, it is interesting to note that crimes are solved today by comparably small, invisible to the naked eye, cells left behind whose DNA reveals the criminal's identity. $5,500.