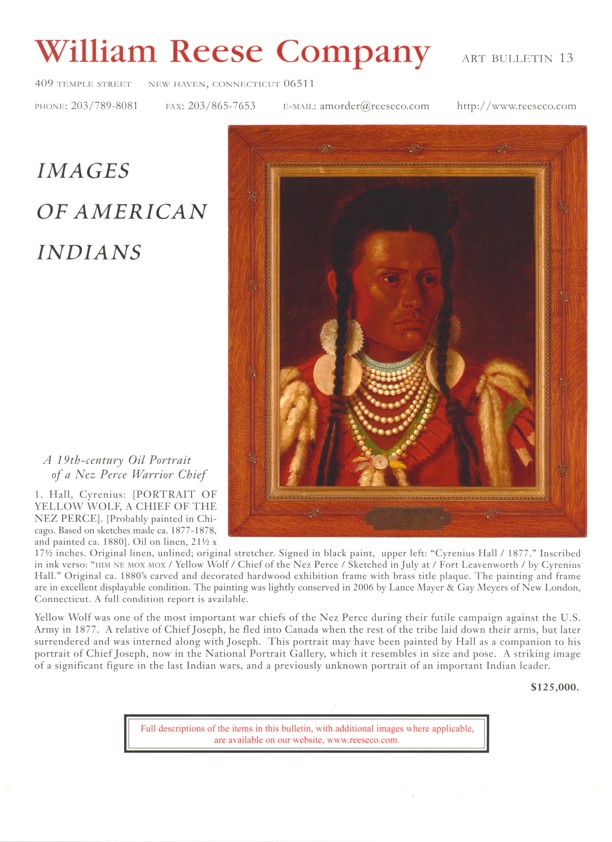 The William Reese Company has issued its 13th "Art Bulletin." This one contains ten items under the heading Images of American Indians. Offered are some of the finest drawings of American Indians, some as individual framed or framable works of art, others as plates in very old and very important books. This is all top tier material, and not inexpensive, but for those who collect works pertaining to America's natives at the highest level, this is certainly a magnificent top ten list. So, let's count them down (or up).

1. An 1877 portrait of Nez Perce Warrior Chief Yellow Wolf, painted by Cyrernius Hall (pictured on the cover). Yellow Wolf was one of the leaders of the Nez Perce tribe that, after attempting to defend their tribal homeland, was chased on a 1,600 mile pursuit north, to Montana. Yellow Wolf finally made his escape across the Canadian border, but later returned to America where he was interned. An inscription indicates the image was sketched at this time, since it is inscribed "Sketched in July at Fort Leavenworth." Yellow Wolf would eventually make his way back home to the small reservation the Nez Perce were granted. $125,000.

2. A circa 1830 chalk and charcoal drawing of Chippewa Chief No-tin, also called Wind, by Charles Bird King. This drawing was used in McKenney and Hall's History of the Indian Tribes of North America. McKenney considered No-tin "a good hunter and brave warrior." $28,000.

3. The two-volume (1857/1866) Henry Bohn printing of George Catlin's Illustrations of the Manners, Customs, and Condition of the North American Indians… This edition is noted for its hand-colored plates. $45,000.

4. A rare mezzotint portrait by Francis Parsons of Cunne Shote, the Indian Chief, a Great Warrior of the Indian Nation. This portrait was drawn around 1762 when a few Cherokee Chiefs visited London. Cunne Shote is wearing a combination of European and native dress, and holds a knife while wearing a peace medal given him by King George II. $20,000.

5. A most remarkable painting of Cheyenne Warrior Roman Nose by Robert Riggs. It is hard to describe this dramatic portrait, other than the Indian looks like some superhero in modern art. See the image on page two of this review. Roman Nose wears a necklace of human fingers to go with his many feathers in this circa 1948 painting. $250,000.