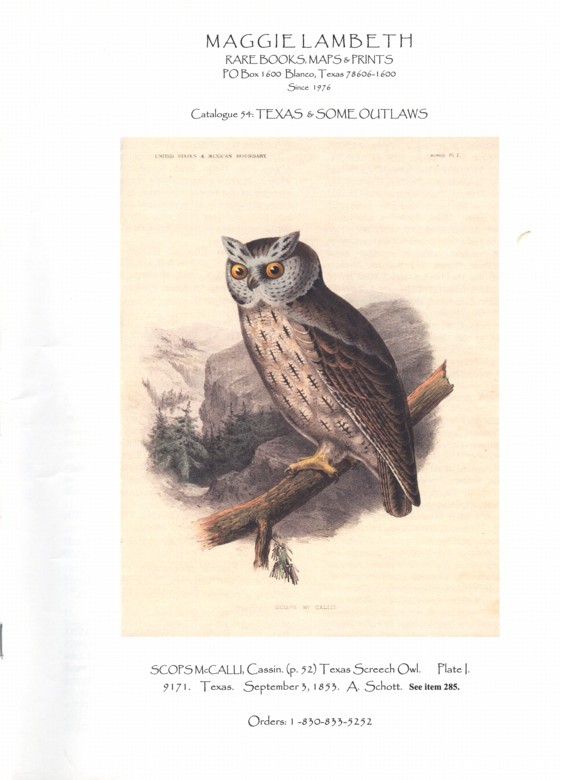 Maggie Lambeth Rare Books has issued a new and extensive catalogue of Texas and Some Outlaws. There is also a bit of New Mexico in here, but perhaps they are unreconstructed Texans who still believe in those old boundaries which placed most of New Mexico within the borders of the Lone Star state. Offered are 425 items, few very expensive, and yet many fairly obscure and providing information that will be hard to find elsewhere. For example, there are numerous county histories available. Texas has a lot of counties, and you will not find information about them all that easy to obtain. County histories tend to be short-run printings with limited distribution, but Maggie Lambeth manages to come up with several that will appeal to those focused upon a particular region in this large state. Here are a few of the items from this latest catalogue, which provide samples though hardly an overall view of the varied subjects these books cover.

John Lomax was the premier preservationist of America's folk music. Along with his son Alan, he traveled the American South during the 1930s, using relatively new portable recording equipment to record rural folk musicians. He especially focused on prisons, where he found many black folk and blues singers whose art was still mostly uninfluenced by jazz and more modern musical trends. His recordings, gathered for the Library of Congress, preserved countless examples of traditional American music that otherwise would have been lost. However, long before he packed up his car with recording equipment and hit the road, John Lomax was already preserving traditional music, especially from his home state of Texas. One of these contributions is the 1919 book Songs of the Cattle Trail and Cow Camp. This is a moo-ving tribute to the music of the real cowboys, before they were co-opted by the Hollywood singing "cowboys." Item 239. Priced at $125.

Here is the story of one of those outlaws: Rube Burrow; King of the Train Robbers. Burrow was an Alabama native, an apparently law abiding son of a respectable family who set off for Texas as a young man to become a cowboy. Somewhere along the way of his cow-poking career, Burrow decided to go for the bigger and easier money afforded by train robbing. His first heist came in 1886 when he robbed $300 from a train in Bellevue, Texas. This was followed by a more successful $4,000 haul, which in turn led to a long string of robberies. His modus operandi was to sneak into the cabin at a stop, and force the engineer to halt the train somewhere out of town. Burrow developed something of a reputation as a Robin Hood as he only stole from the rich. Well…duh. He apparently did help out some people in need, particularly family when he returned to Alabama. On a less pleasant note, he is believed to have killed a postmaster and perhaps a few others. In 1890 he was captured, escaped, but shot and killed by one of the men who had captured him. Carl Breihan's 1981 book about Burrow is item 67. $100.

For those with an interest in cookbooks, here is an unusual title: Mrs. Rasmussen's Book of One-Arm Cookery. The book was written by Mary Lasswell in 1946 and carries her inscription. Ms. Lasswell believed a cook should be able to prepare a meal in one pot over an open fire. The book and its strange title were named for a lady who supposedly cooked with only one arm so that her other hand would be free to hold a beer. This really sounds more like a cookbook for men. Item 122. $60.