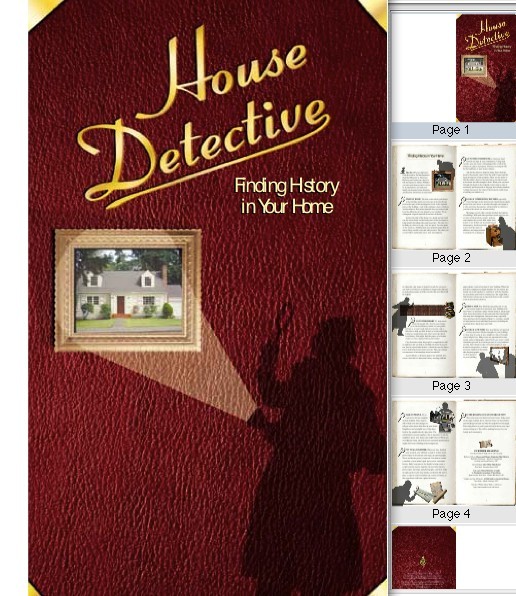 There are two ways to research your home’s history. The Smithsonian exhibition is nice enough to provide a downloadable and printable guide of just how to do this. One is through physical inspection of the structure. Such things as determining the construction materials, how they are joined together, the building style, all can provide clues as to when the structure was built. The other avenue of research is to investigate whatever written records (or memories) there are which pertain to your house.

I decided to try to find out what I could about my own home, an old farmhouse in a small town between Boston and Cape Cod. My first step was #7 on the Smithsonian list: “Talk to People.” This could at best provide hearsay, as the house was believed to have been built around 1860. Perhaps in my youth I could have found someone who remembered this time, but today there is no one, not one single person, who remembers this era. So, I could only go on what had been passed down to neighbors, which by now was not much. Supposedly, the house was built for a man named Parker by his father who lived across the street.

The next step is to look for a written record. There’s no better place to start then clue #2 on the Smithsonian’s list: “Go to the Courthouse.” There you will find a complete history of the title to your property. It isn’t the best organized system in the world. You can start from when you purchased the home (this is one date you should know). It will then refer you to the book which recorded the previous transaction, which will refer you to the one before that, and so on. Eventually, you’ll have the entire history.

What I found for my own property is that it was once part of a group of lots put together in the early 1800s by one Noah Weston. He then broke off a lot in 1856 and sold it to Gustavus Parker. Four years later, Parker, through an indirect transaction, would sell it to his wife Harriet. The records do not specifically say when the house was built, but I conclude that it was sometime in the late 1850s. That conclusion is reached from the fact that Parker bought the property from Weston in 1856 for $50 and sold it to his wife in 1860 for $1,500. Either that or Mrs. Parker was terribly hoodwinked. While the property record does not give us a reason why he sold the property to his wife, elsewhere I learn that the outbreak of the Civil War had a devastating effect on his father’s business. Perhaps Gustavus was also on the hook for some of the business’ obligations and this sale was designed to insulate the house from any business debts.

Next the record shows that the house would not be sold again for more than half a century. Finally, after Harriet’s death in 1912, it would go through some holding period transactions. It is sold to what appear to be outsiders, but town records show that Gustavus continued to live there until his death at the end of 1913. The next year, the house was purchased by Gustavus and Harriet’s son Roscoe, and he too would live there until he died in 1938. His heirs would finally sell the house to someone outside the Parker family, the Nickersons, in 1940, and they too would stay until after Will Nickerson died in 1985. The following year his widow, Emily, would sell the house to us. To my surprise, I find that we are only the fourth family to live in this house in almost a century and a half.