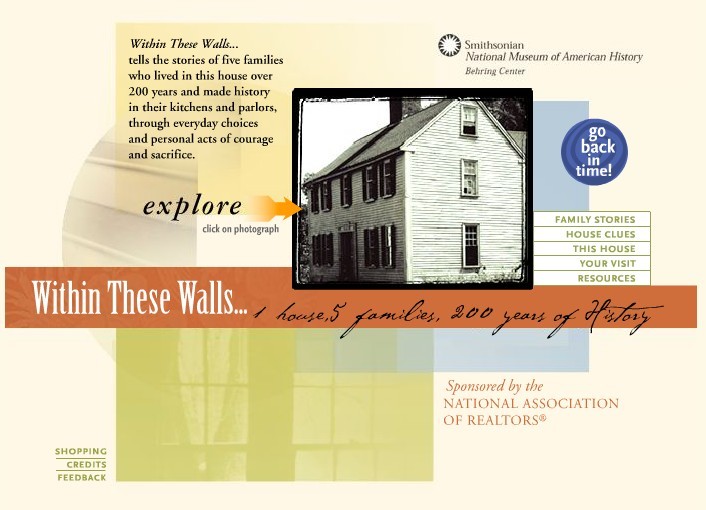 There is most likely a piece of American history right under your nose at this very moment. It may be old; it may be new. It may be famous, but probably isn’t. It undoubtedly appears in several written works, but not as a main character. But it could be. In fact, the Smithsonian, the premier repository for all things American, thinks it should be the lead character in a book. What’s more, they want to help you write that book.

The character we’re talking about, of course, is your house. It may have a long history behind it, or it may not, but that’s all right. People are already writing about George W. Bush’s presidency. It’s never too soon to start keeping a record, because your house is one small slice of American history, and if your written work never achieves mass appeal, it will always be massively appealing to those people who live in or are familiar with it.

The online exhibition we are looking at is the Smithsonian’s National Museum of American History exhibit entitled “Within These Walls.” The Smithsonian has taken a 250-year-old house from Ipswich, Massachusetts, and looked at the lives of five of the families who lived there in the roughly 200 years it was inhabited. Actually, they’ve done a lot more. They’ve taken down the house and reassembled it in their museum in Washington. You aren’t expected to do anything quite so dramatic. You are permitted to tell the story of your house while leaving it physically in place.

The Ipswich house featured in this exhibit certainly has an interesting history. Abraham Choate, the builder and first owner, was a fairly wealthy individual in the 1760’s. In time, the area became a mill district, and the owners were no longer so well-off. A century later, the home had been divided into two apartments and housed recent immigrants struggling to get by. And while the house would never regain the prestige it gave the Choates, there were some advantages that accrued only to later residents. As the exhibit points out, it wasn’t until the 1940s that Roy Scott, one of the later residents, installed the home’s first indoor toilet.

If you visit this online exhibition, you’ll be able to learn a little about these five families and their times. If you visit the Smithsonian, you’ll even be able to see the house. However, we want to focus on the do-it-yourself part of the exhibit. Here it tells you how to learn more about your home (presuming it’s an older one).