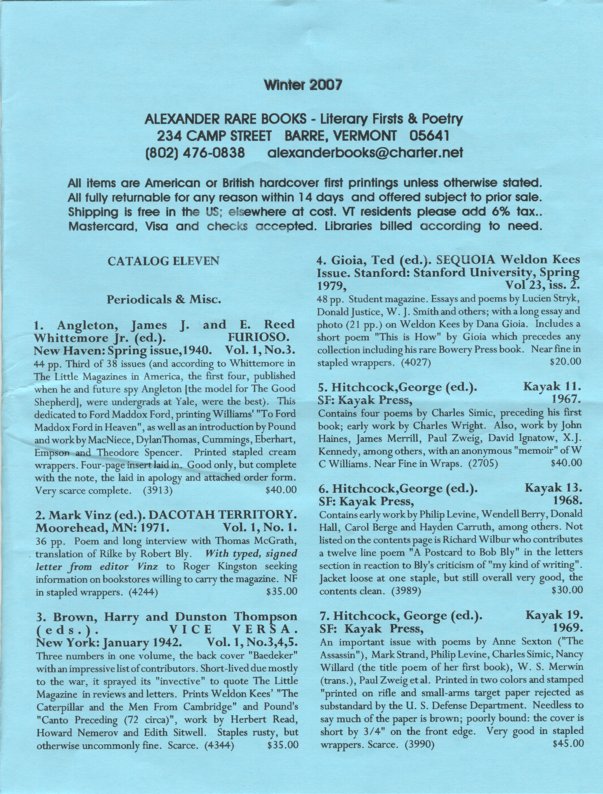 We have received the latest catalogue from Alexander Rare Books, Winter 2007, just in time for spring! Alexander offers Literary Firsts and Poetry, with this collection focused primarily on poetry. Most works are from the 20th century, but a few items from the previous one have managed to sneak into the catalogue. Actually, the majority of items come from the second half of the 20th century. There is no shortage of material to consider with 345 pieces being offered. I would not even pretend to be knowledgeable in the field of poetry from the past fifty years, so the samples from this catalogue described in the next few paragraphs are perhaps more atypical than typical of the majority of what is offered. Those who collect in the area of more recent poetry will find much more of interest in their field being offered by the Barre, Vermont, bookseller than this review reveals. You should check it out. Now, for some samples.

Item 8 is an important piece for collectors of the "beat" generation. It is volume one, number two of the Evergreen Review, published by the Grove Press in 1957. It introduced the writing and poetry of the emerging San Francisco "beat" culture to the nation. Alexander describes this issue as "the most important issue of this long-running literary journal..." It featured works by Henry Miller, Ferlinghetti, McClure, Kerouac and Allen Ginsberg. It includes the first separate publication of Ginsberg's Howl. This piece would be the focus of an important first amendment legal case that year. It was the subject of an obscenity trial, saved when the judge determined it had redeeming social value. Ginsberg (in 1993) and McClure signed this copy of the periodical. Priced at $300.

Item 277 is an early printing of Poe's last poem (or at least one of the two poems generally considered to be his "last). It is The Bells, as it appeared in The Boston Cultivator on November 3, 1849. This poem was originally submitted to Sartain's Magazine, but was picked up and republished by this long-running farm magazine less than a month after Poe died. Offered is volume 11 number 44 of this Boston farm publication containing Poe's poem. $295.

Item 22 is the first printing of the first novel by F. Scott Fitzgerald, This Side of Paradise. It was published in April 1920, in a run of 3,000 copies, which Alexander notes, was reported to have sold out in three days. This copy is in exceptionally good condition, though it lacks the scarce dust jacket. $5,000.