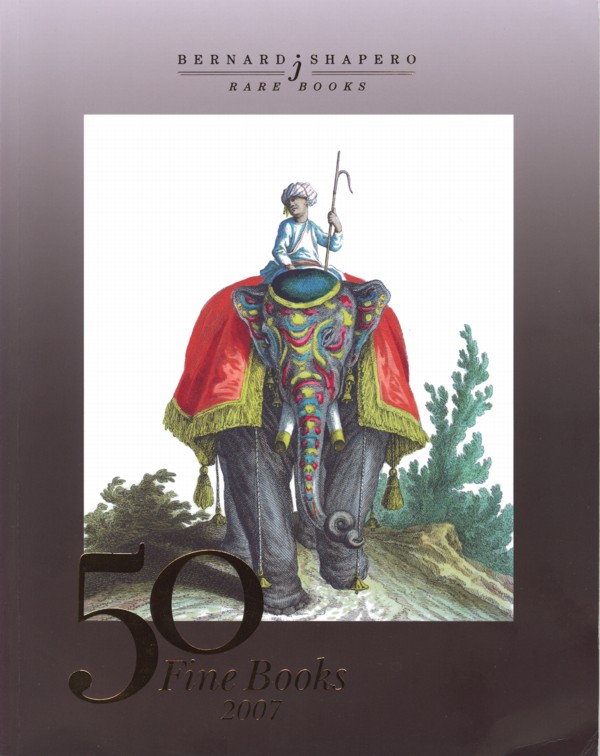 Bernard J. Shapero Rare Books has issued its catalogue of 50 Fine Books 2007. This is a collection of fifty stunningly beautiful illustrated books. Most are colored, though those that are not are still exceptional.

Topics are varied. There are beautiful bird books from Britain, Europe, Australia, North and South America. Quadrupeds, insects, and conches also get their due. There are several looks at Russia from the time of the czars, Egypt when its antiquities were just being rediscovered, fantastic views of the Himalayan and Pyrenees Mountains, Vienna, Amsterdam, Hong Kong and Pompeii. There are displays of horsemanship, both good and bad. There are portraits of the emperors of Turkey and the Indians of North America. Flora and gardens can be seen. There are beautifully illustrated tropical fish to be found. This truly is a magnificent collection of fine books, and here are a few examples.

Item 48 gives us one of the best looks available at America's Indians while their lives were still mostly untouched by Europeans. From 1832-1834, German Prince Maximilian traveled through America, going all the way up the Missouri River to present-day Montana. He wrote down his experiences with the tribes he met, while Artist Karl Bodmer painted their likenesses. Offered is a first edition from 1839-41 of Reise in das innere Nord-America..., four volumes with numerous hand-painted illustrations. Priced at £175,000 (British pounds, or approximate US equivalent of $337,988).

French explorer Jean-Baptise Chappe D'Auteroche visited Siberia in 1761. His journey was to observe the transit of Venus, but as his book will attest, he observed much more. His illustrated look at Siberia, its climate, people, wildlife and minerals, is presented in Voyage en Siberie, published in 1768. It also includes a translation of Krasheninnikov's description of Alaska and the Pacific Northwest. Chappe D'Auteroche would travel to observe another transit of Venus off the California coast a decade later, but was fatally struck down by disease. Item 9. £11,000 (US $21,250).

For an even earlier view of Russia, item 8 is Reizen over Moskovie, door Persia en Indie... by Cornelis de Bruyn. De Bruyn was a Dutch painter who visited Moscow, Persia and India in 1701. This 1714 first edition includes a picture of Moscow, looking like not much more than a rural village. £9,500 (US $18,350).