More Celebrity and Other Books from James Pepper Rare Books 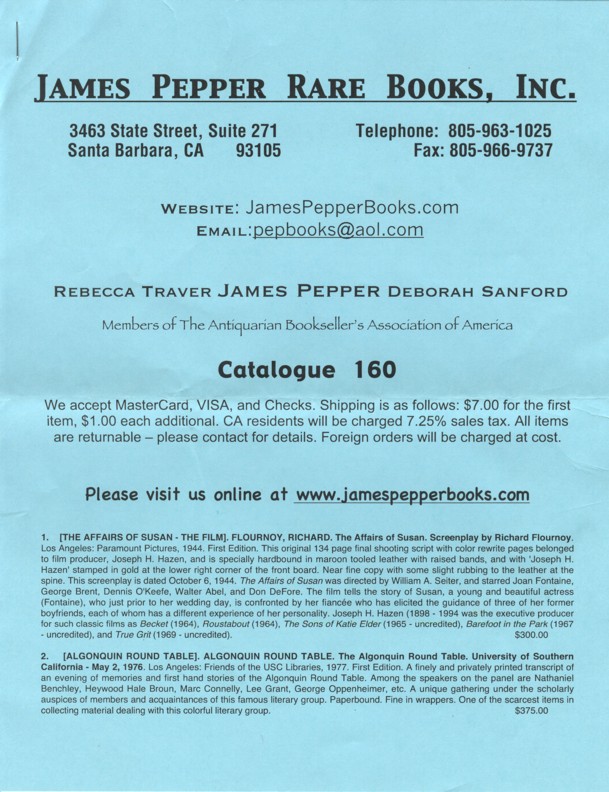 More Celebrity and Other Books from James Pepper Rare Books

James Pepper Rare Books has issued their 160th catalogue, containing 150 items primarily related to stars of stage, screen, and books. The Santa Barbara, California, bookseller finds much material from regions a bit farther south in California, specifically, the greater Hollywood area. Many of these items are filmscripts or books which later were adapted for the screen. They range from recent Academy Award winners to long ago obscurities, a few from the silent era. However, not all of what is offered is film related. There are many books from authors who have become celebrities in their own right, a few writers sufficiently popular to achieve star status themselves. James Pepper's catalogues are fun to read because so much of what is offered touches on popular culture familiar to us all. Here are a few samples from their latest group of items offered for sale.

We start with a classically collectible book with a most interesting association. Item 52 is a first edition, second issue of F. Scott Fitzgerald's The Great Gatsby, published in 1925. This is already one of the most collectible works of 20th century American literature, but this copy was given to actor Warner Baxter by the director and cast at Paramount Pictures. The film? It was the first film version of, of course, "The Great Gatsby." The novel was adapted to film several more times, most notably the 1974 rendition with Robert Redford reprising Baxter's role. However, the 1926 Baxter version is quite literally incomparable, incomparable because no copy remains to compare with later editions. It is officially "lost," though a one-minute trailer for the film was recently discovered. This copy is signed by Baxter, an enormously successful actor in the 1920s and 1930s. Three years later, with talkies having replaced silent films, Baxter won just the second Academy Award for Best Actor for his portrayal of the Cisco Kid in "In Old Arizona." The movie was the first talking western, and Baxter the first singing cowboy on film (he contributed a song). Baxter also starred in the 1933 musical classic "42nd Street." He appeared in over a hundred films, the last in 1950, a year before his death. Among those signing the book are Gatsby director Herbert Brenon, and actors and actresses Lois Wilson, William Powell, Neil Hamilton, George Nash, Hale Hamilton, and Carmelita Geraghty. Included with the book are ten 8" x 10" photographs and other memorabilia from the film. Priced at $55,000.

Item 121 ties together a famed crusading author with perhaps the biggest of all silent movie stars. The work is The Profits of Religion: An Essay in Economic Interpretation. Published in 1918, Upton Sinclair describes the corrupting influence of money on religion, an issue still with us today. Sinclair is best known for "The Jungle," which exposed unsanitary conditions and hard labor practices in the meat-packing industry, but Sinclair promoted reform and radical causes throughout a long career. This particular copy is inscribed to silent film actor Charlie Chaplin. Chaplin was also a supporter of leftist causes, and reportedly Sinclair played a significant role in the development of his views. $3,000.