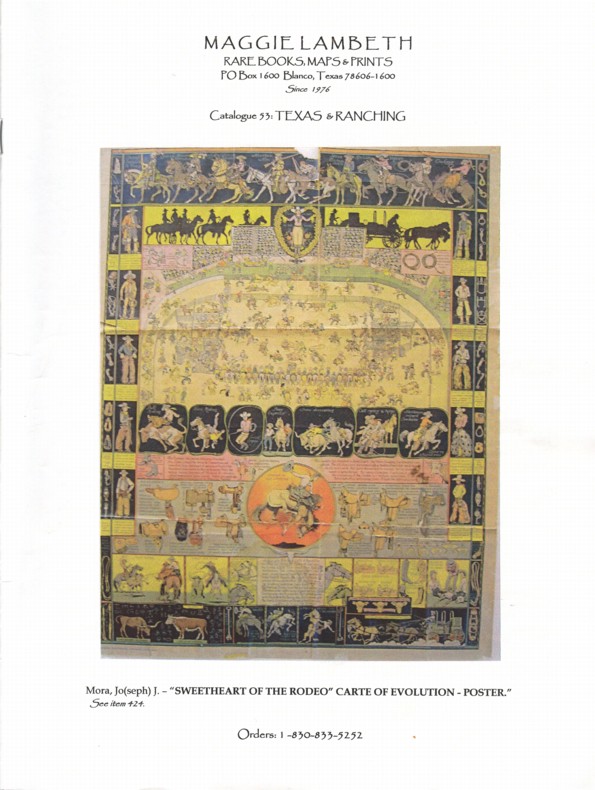 The latest catalogue to arrive from Maggie Lambeth Rare Books, Maps and Prints, of Blanco, Texas, is entitled Texas and Ranching. Those two go together like Texas and oil. You either raise cattle or pump oil in Texas, or at least that's what you did in the old days. Times have changed. Oil no longer dominates the economy, most Texans live in sprawling metropolises like Dallas and Houston, and the big businesses in Texas have names like Dell and Halliburton. Still, vast areas of the state remain lightly populated, unsuited for much except running cattle. Ranching may no longer be the occupation of most Texans, but it does still dominate much of its landscape. For those with an interest in Texas and ranching, and its associated cast of characters -- cowboys, cowgirls, and those who owned ranches bigger than most cities, Maggie Lambeth has a catalogue of books you won't want to miss. Let's take a look inside.

The Johnson Ranch was not the largest of Texas ranches, but it is one of the best known. That is because it not only produced cattle, but U.S. President Lyndon Johnson as well. Johnson certainly fit the image of "large as Texas," a wheeler-dealer of legendary proportions, who rose to lead the Senate, was selected by JFK to be his running mate, and succeeded to the presidency when the latter was assassinated. Item 203 is A Family Album, written by Rebekah Baines Johnson, the President's mother. This was actually something of a scrapbook Mrs. Johnson kept of the family and their notable son, which was published in 1965, seven years after her death. The Johnsons were not wealthy ranchers, but a family that scraped by in the then rural Hill Country of Texas, long before it became some of the most highly desirable residential real estate in the state. Priced at $25.

Here is another famed Texas politician, from an earlier age, who made it almost as far as LBJ. John Nance Garner, aka "Cactus Jack," was first elected to the House of Representatives in 1902, and was elevated to Speaker in 1931. He was a major contender for the Democratic presidential nomination in the year this book was published (1932), but when it became evident the nomination would go to Roosevelt, he accepted the calling for vice-president. However, by the time of Roosevelt's second term, Garner began to split with him on numerous issues, and unsuccessfully opposed FDR for the presidency in 1940. The result was that he retired from politics, and was no longer his successor when Roosevelt died in office a few years later. Garner is best remembered for his classic description of the vice-presidency -- "not worth a bucket of warm piss." In Garner's case that was probably correct, though that would not be true for FDR's third vice-president, Harry Truman. Item 136 is The Speaker of the House; The Romantic Story of John N. Garner, by George Rothwell Brown. $25.

Item 40 is the story of a pioneering woman, A Bride on the Old Chisholm Trail in 1886. Author Mary Taylor Bunton convinced her husband to allow her to accompany him on a cattle drive along the Chisholm Trail, an unheard of idea at the time. Mrs. Bunton was given a buggy to ride, but even so it was a dangerous and exciting journey, one few women were ever allowed to make. At the time, the Chisholm Trail was used to drive cattle from southern Texas to stockyards in Kansas, where their value per head was much higher. Mrs. Bunton published the story of her ride many years later, in 1939, long after local railroads had replaced the old trail for moving cattle. $85.