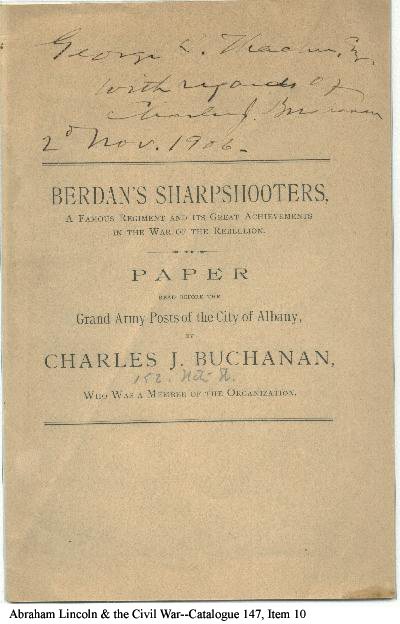 There is simply no better part of the job than having to read book dealers’ catalogues. The McGowan catalogue is interesting for the richness of the material. I found myself looking up almost every item. The second catalogue, by the William Reese Co., is entirely manuscript material. I read the lots carefully and decided at least a dozen of them are interesting starting points for new collections. Flo Silver’s catalogues are slim but contain the most lots – almost 600. Virtually everything is affordable. Oak Knoll Books simply produces a constant flow of interesting catalogues of books that relate to books. There you have it. Four catalogues. Four approaches. Interesting material.

Those who collect the Civil War or are considering this collecting field will be interested in the McGowan Book Company’s newest release Abraham Lincoln & the Civil War – Catalogue 147, one hundred well described items that form the connective tissue for those who pursue completeness in their Civil War collections. There are so many ways to collect the Civil War. That said, this war, its causes and its aftermath are a uniquely Southern obsession. Like an earache kept alive by constant poking, the South is still not ready to surrender although their God, the General Robert E. Lee, did. One suspects that only time, and much more than has passed – it being a mere 138 years since Appomattox - must pass before even a scab will form. Mr. McGowan makes a market and a business out of this obsession. His catalogues are always interesting and are “must reads” for those interested in this field.

As a once “temporary” Southerner who lived in Florida near tornado magnets and amid many Northerners who came South to among other things “get right, way right” on the race issue it’s quite clear the War isn’t yet over. This history lives on in some sense the way it lives on in Ireland and in the Middle East. There’s apparently no percentage in surrender. Looking from the perspective of Florida at the Civil War here are several interesting items:

Call, Richard Keith. Union. - Slavery. – Secession. Letter of Governor R. K. Call of Florida, to John S. Littell, of Germantown, Pennsylvania. Philadelphia: C. Sherman & Co, Printers, 1861. 31 pp. First edition. Original printed wrappers, tail of spine nibbled without loss to text, else a very good copy with a presentation inscription by John S. Littell (1806-1875), a writer born in New Jersey who later commanded the 76th Pennsylvania Infantry. The author of this work, Gen. Richard Keith Call (1791 – 1862), served as Governor of Florida from 1835 to 1844, and led the United States Army in its war against the Seminoles. A Jacksonian, he was “one of the few men in the South that looked on secession as treason. On 12 February, 1861, Gov. Call wrote a long letter to John S. Littell of Pennsylvannia, deploring secession but defending slavery.” This pamphlet presents that letter. Not in Corse or Work. $275