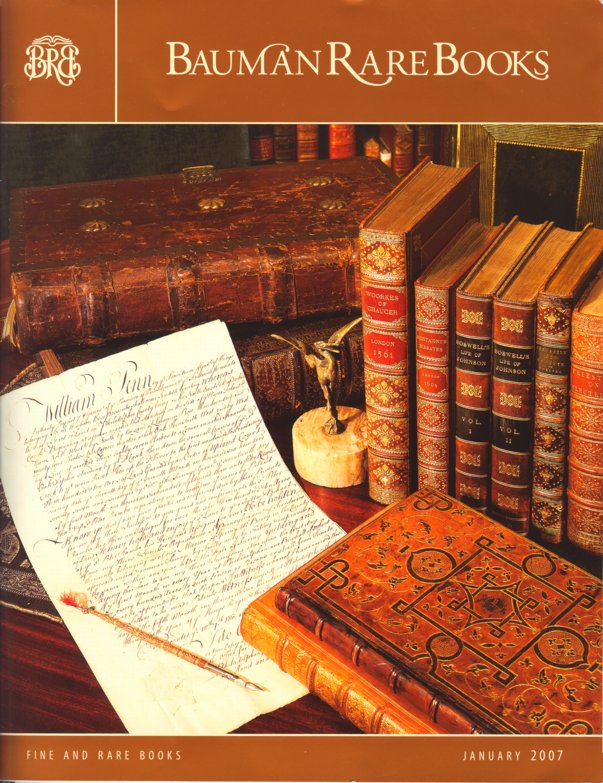 Bauman Rare Books, of Philadelphia and New York, has issued a new collection of exceptional material. As we have come to expect, Bauman offers a variety of high-end material, ranging from literature, science, travels, Americana, poetry, art, sports, and religion, to various signed manuscripts, from Revolutionary War soldiers to John F. Kennedy. Bauman's catalogues befit the quality of the works they offer -- striking publications themselves, filled with photographs and thorough descriptions of the items presented. Here are a few samples from the January 2007 issue in their series of distinctive and important catalogues.

The catalogue starts with the last of the great 17th century Shakespeare folios, the fourth folio from 1685. Perhaps the greatest piece of western literature ever published, the folios preserved Shakespeare's plays, as many as seventeen of which might have been lost forever were it not for the folio editions. With the third folio, seven additional plays not found in the first two were added, though it appears that at most one of these was actually written by Shakespeare. In Shakespeare's time, plays were not regarded as literary works. They were meant to be performed, not read, so often they were never published, but performed from manuscripts. Fortunately, a few of Shakespeare's associates salvaged his plays, preserving them in the folio editions, the first of which appeared in 1623. A first folio sold at auction last year for over $5 million, putting it out of most collectors' reach. The fourth is hardly a budget item, but is not yet that expensive. Item 1. Priced at $185,000.

Item 24 may not be considered one of the greatest literary masterpieces, but it may well have had the greatest impact of any piece of American literature. In 1852, Harriet Beecher Stowe's Uncle Tom's Cabin was first released. It was a stark attack on slavery, and it could not have come at a more significant time. America was desperately trying to find some sort of compromise between the irreconcilable -- slavery and freedom. The Compromise of 1850 had provided some respite, but abolitionists in the north and those who wished to spread slavery to the new territories from the south were pulling the attempted compromise apart. Into this divide Stowe comes along with her stunning depiction and indictment of slavery in a book which would be read by large numbers of Americans. Its publication would prove to be one of the important events of the 1850s that would push the nation to its inevitable split at the start of the next decade. Item 24 is a first edition of this work of enormous significance. $21,000.

Here is another first edition of monumental importance: On the Origin of the Species by Means of Natural Selection...by Charles Darwin, published in 1859. Darwin's theory of evolution was already two decades in the making, formed as result of his role as naturalist on the expedition of the Beagle during the 1830s. He was not unaware of the controversy his findings would generate. Darwin is still a controversial figure in some quarters today, but his findings opened the door to explanations of such things as similarities between species and the existence of fossils which had previously been difficult to explain. Item 35. $58,000.