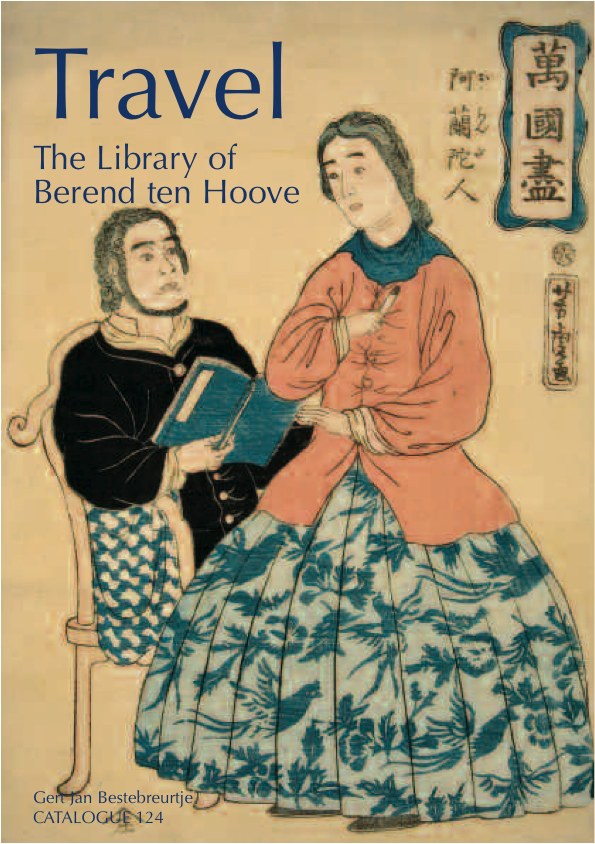 Just in is the latest catalogue from Gert Jan Bestebreurtje Antiquarian Bookseller and Printdealer of the Netherlands. Catalogue 130 is entitled simply Travel, although it includes what are commonly referred to as "voyages," travels by sea, as well as those overland. Unlike many of Bestebreurtje's catalogues where the bulk of the material is Dutch in origin, these works are well distributed across the nations of Europe and America. It is a diverse collection of travels and voyages that will interest collectors of many lands. Due to our own language limitations, we will focus on works offered that are in the English language, of which there are many, but there are also numerous books available in various European languages. Now for a few samples of material Bestebreurtje is currently offering.

Journalist and explorer Henry Morton Stanley is best known for tracking down missionary David Livingstone ("Dr. Livingstone, I presume") in 1871, but his final journey to Africa was even more dramatic. He was sent to save Emin Pasha, the German-born Egyptian Governor of Equatoria, the far southern province of the Sudan. Muslim rebels had cut the province off from Egypt, leaving Pasha isolated (though still in contact by mail). Stanley was persuaded to head up what was called the "Emin Pasha Relief Expedition." Stanley took a long and arduous route up the Congo River and through thick, tall forests through which only a limited amount of light penetrated to the surface. Hence the title of his book, In darkest Africa or the quest, rescue, and retreat of Emin, governor of Equatoria. Stanley's expedition ran from 1887 until 1889, and it took quite some time to convince Emin to leave. While Stanley returned to Europe again a hero, the loss of life was staggering, both among those who accompanied Stanley and those he encountered along the way. Item 167 is a first edition of Stanley's book, published in London in 1890. Priced at €425 (Euros, or approximate U.S. dollar equivalent of $558).

It is the sad fate of most celebrated orators, like great singers, who lived in the days before sound recording, to be mostly forgotten. Henry Ward Beecher is not totally forgotten, but his reputation no longer resounds across the land as it once did. Beecher was a clergyman in New York who fought with his compelling voice for the cause of abolition, as well as other liberal values of the day, such as women's suffrage, temperance, and other progressive causes. Thousands would attend his sermons, perhaps a forerunner to the megachurch of today. Though a clergyman, Beecher helped raise funds for rifles to be supplied for the free state cause during the fight over "Bloody Kansas," helped raise forces for the Union cause during the Civil War, and prodded Lincoln to emancipate the slaves. In the 1870s, he was charged with adultery with a parishioner's wife, and though acquitted, it would remain a cloud over his reputation. Item 3 is Henry Ward Beecher: a sketch of his career...by Lymon Abbott and S.B. Halliday, published in 1887, just after he died. In the preface, the authors state, "It cannot be questioned that no other man has exerted so wide and profound an influence on the progress of thought - moral, political and religious - in this country for the past fifty years, as has Mr. Beecher." That may be true for any man, but there was a woman who may have had an even greater influence, his sister, Harriet Beecher Stowe, author of "Uncle Tom's Cabin." €125 (US $164).