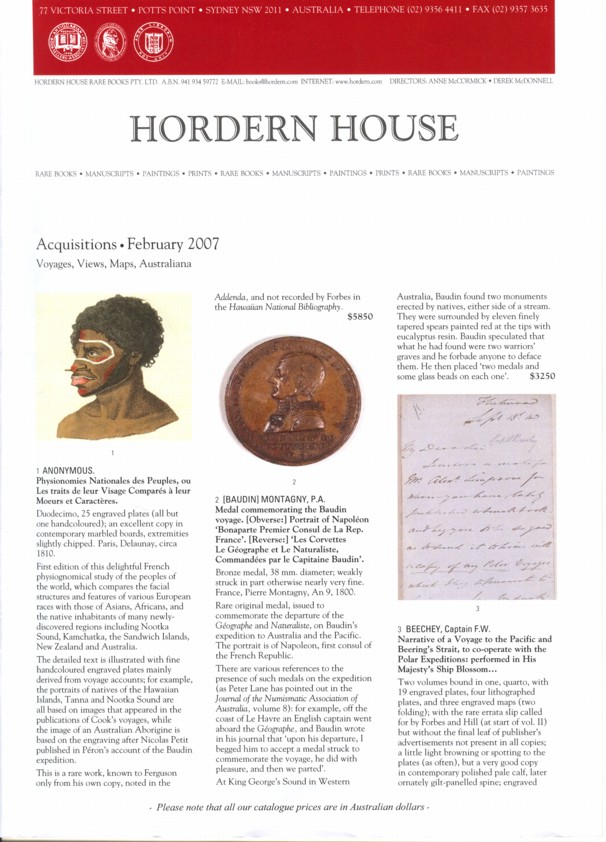 Recently received at AE Monthly from halfway around the world is a catalogue of February 2007 acquisitions from Hordern House. The Sydney, Australia, bookseller always provides a balanced collection of material, pertaining not only to its home continent, but those of Europe and America as well. Most early Australian material, naturally, pertains to exploration, and those visits were made by the great European navigators. Ties are also regularly found to America as these voyages usually traversed wide ranges of the Pacific, often visiting the west coast of America and Hawaii.

That is not to say everything in this catalogue pertains to early voyages. There is some material of a strictly Australian interest. However, other collectors would be wise to take a look at what they have as these are clearly international catalogues. The latest is headed Voyages, Views, Maps, Australiana. Here are some samples of what Hordern House has recently discovered.

Captain Frederick W. Beechey recounts a voyage across the Pacific and through the Bering Strait in Narrative of a Voyage to the Pacific and Beering's Strait, to co-operate with the Polar Expeditions; performed in His Majesty's Ship Blossom… The trip ran from 1825-1828, and while Beechey made stops at and explored several Pacific islands, including Hawaii, the main goal was to provide relief for northern Canadian expeditions by Parry and Franklin. Parry was attempting to find a northwest passage, but the wreck of his ship ended any hopes of success. Franklin traveled overland to map the north coast of Canada, traveling up the MacKenzie River. Beechey, sailing all the way across the Pacific almost hooked up with Franklin, but missed the latter by just 150 miles. Despite this disappointment, Beechey managed to visit many warmer places, including a stop at Pitcairn Island where he interviewed John Adams, the last survivor of the mutiny on the Bounty. This copy includes a bound-in letter from Beechey to the publisher. Beechey asks his publisher to forward a note and a copy of his book to Alexander Simpson, an employee of the Hudson's Bay Company. Simpson's brother was arctic explorer Thomas Simpson, who died on his last trip with an unexplained bullet in his head. Item 3. AU $11,000 (Australian dollars, or approximate US equivalent of $8,649).

Louis Antoine de Bougainville was the first French navigator to circumnavigate the globe. He set out heading west in 1766, and discovered a few Pacific Islands, though not the mythical "Davis Land" thought to be situated off the Chilean coast. He thought he discovered Tahiti, only to find another explorer had beaten him there. However, his portrait of Tahiti as some sort of island paradise exists to this day. Bougainville also discovered a beautiful flower in South America which now bears his name -- the bougainvillea. Item 4 is the first English edition of his book, A voyage round the World, published in 1772. AU $9,000 (US $7,076).