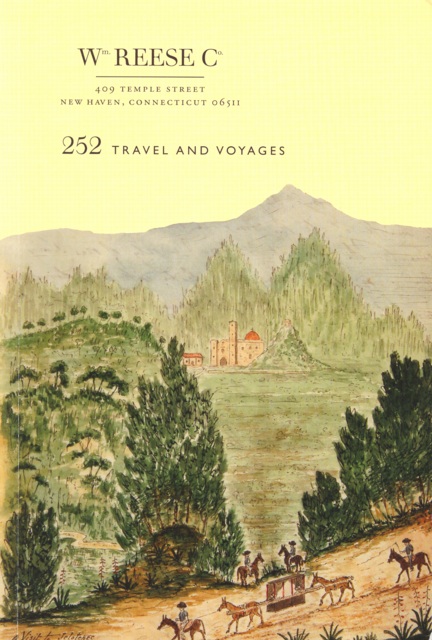 The William Reese Company has issued its first catalogue for 2007, Travel and Voyages. Most books and manuscripts qualify for Reese's usual specialty of Americana or European Americana, but this time there are a few exceptions. For example, there is a ship's log from a British patrol off the coast of Africa, sent to intercept the slave trade. Well, perhaps that is an item of Americana, since the slaves were undoubtedly being sent there, though thankfully they never made it. This latest catalogue is filled with accounts of journeys from as early as the 15th century to as late as almost the 20th. It is another outstanding collection from Reese for those who collect at the upper level within the field of travel and voyages. These are a few of the items awaiting your consideration.

Item 51 is a great rarity and work of major importance for explorations of the Pacific Northwest. Published in 1802, it is Relacion del Viage Hecho por las Goletas Sutil y Mexicana en al Ano de 1792...attributed to Jose Espinosa y Tello. This book comes in two parts – the first covering all previous Spanish voyages to the west coast, and the second the expedition of the ships Sutil and Mexicana. This was the last major Spanish expedition to the Pacific Northwest, a voyage that went as far north as Alaska. It includes maps covering the coast from California to Alaska. It is one of but 122 of 12,500 important works that achieved Wright Howes "dd" rating, the rarest of all, in his USiana. Priced at $35,000.

Howes tells us that these two Spanish ships cooperated with the voyage of George Vancouver to the Northwest in the years 1790-1795. Vancouver recounts this trip in A Voyage of Discovery to the North Pacific Ocean... published in 1798. Vancouver had served on the last two of Cook's voyages, and this was the most important British post-Cook voyage to the American Northwest. As with Cook, Vancouver also visited Australia and Hawaii, the latter being where Cook met his untimely end. However, it is his northwest explorations for which Vancouver is best remembered, a city and an island still bearing his name. Item 153. $72,500.

Alexander Selkirk was the most notable of strandees, if that's a word, though he is less well known than his fictional counterpart, Robinson Crusoe. The book is A Voyage to the South Sea...wherein an Account is Given of Mr. Alexander Selkirk...upon the Uninhabited Island of Juan Fernandes by Captain Edward Cooke. Cooke commanded one of the ships in Woodes Rogers' buccaneering expedition when he put down on Juan Fernandes Island. There they found Selkirk, who had departed the ship Cinque Ports for the deserted island almost five years earlier, not trusting the seaworthiness of that ship (it later sank with most hands lost). Selkirk expected another ship to come by soon, but he seriously miscalculated. Somehow, he managed to survive the years with few tools and much loneliness, living off goats and other animals he found. His tale inspired Defoe's Robinson Crusoe. Item 36, published in 1712. $9,500.