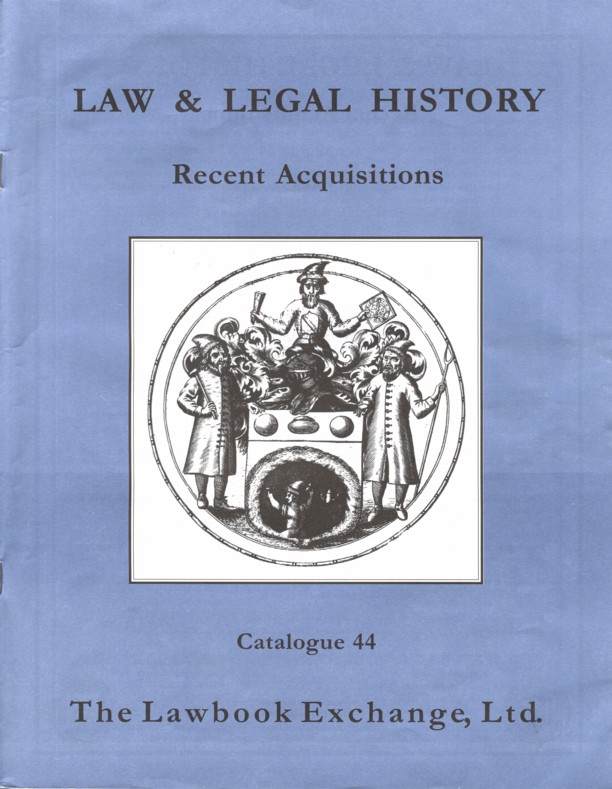 The Lawbook Exchange, Ltd., has issued its 44th catalogue, Law and Legal History, Recent Acquisitions. While the natural target for their catalogues are those either involved in or collectors of the legal profession, some of these books will snare a much wider audience. There are basically two types of books within the antiquarian section of a Lawbook Exchange catalogue. There are works that are primarily of note to those with a scholarly interest in the law. These are works that touch on the more esoteric legal topics, for example, laws on easements, shipwrecks, bankruptcy, medicine and the like. Such treatises will interest those with a particular concern for the field or who more generally collect antiquarian legal tracts. Then there are those books which retell cases of murder and mayhem and such. They appeal to anyone who has ever viewed Court TV, or watched Judge Larry determine the fate of the remains of poor Anna Nicole Smith with a combination of fascination, amazement, and horror. Is this really how our legal system works? We will focus more on some of the titles that might appeal to the Judge Larry in us, but with the note that there are also plenty of books available for those who would rather read an erudite law professor expound on the laws of insurance. Here we go.

G. Lathom Browne and C.G. Stewart put together this intriguing account in 1883: Reports of Trials for Murder by Poisoning; by Prussic Acid, Strychnia, Antimony, Arsenic, and Aconitia. Better dying through chemistry. Browne was a British lawyer, Stewart a chemist, and they state they hope this account of numerous 19th century cases of poisoning will "prove useful to the medical, as well as legal profession." Not to mention the murdering profession. The authors provide guidelines for detecting the use of poisons, which hopefully helped snare some of these notorious killers. Item 24. Priced at $250.

Here is another piece that might appeal to your more morbid intellectual curiosity: The Dying Speeches and Behavior of the Several State Prisoners that Have Been Executed the Last 300 Years. This actually doesn't refer to executions in the "last" 300 years but the previous 300 years, since it is almost three centuries old (1720). It describes the final hours of around a hundred British prisoners, including statements made from the scaffold. Most had been convicted of treason or heresy, and they include royalty and celebrities such as Mary Queen of Scots, King Edward, King Charles I, Sir Thomas More, and Sir Walter Raleigh. Item 29. $300.

Item 12 reports a most bizarre situation: The Surprising Case of Rachel Baker, Who Prays and Preaches in Her Sleep: With Specimens of Her Extraordinary Performances Taken Down Accurately in Short Hand at the Time; and Showing the Unparalleled Powers She Possesses to Pray, Exhort and Answer Questions, During Her Unconscious State. The Whole Authenticated by the Most Respectable Testimony of Living Witnesses. Wow!