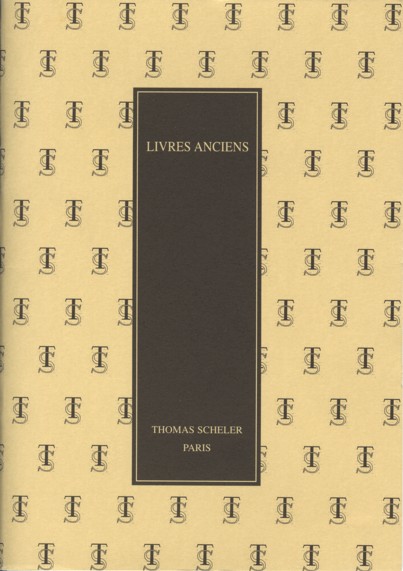 Recently published is the 33rd catalogue of Livres Anciens (or Old Books) from Librairie Thomas-Scheler of Paris. This catalogue is written in the French language, as are the great majority of books offered therein. However, that does not mean that the works themselves are only of interest to collectors of French works. Topics go well beyond the borders of France itself. We will focus on a few books that are of particular interest to American or English collectors since there is no way we can do justice to works of primarily French interest with our lack of fluency in the language. We will simply recommend that those well-versed in the language and who collect French books obtain a copy of this catalogue as soon as possible. For those whose primary tongue is English, here are some titles that may well belong in your collections despite their not being written in your first language.

Item 21 is Nouveaux voyages aux Indes Occidentales...by Jean Bernard Bossu. Published in 1768, it relates Bossu's travels up the Mississippi River (he preferred to call it the "St. Louis River"). The book is taken from letters Bossu wrote home during his journeys between 1751 and 1762. Bossu traveled from Alabama to the east as far north as Illinois. Along with relaying then current information about the people who lived in the area, primarily local Indians, he was also able to gather historic reports of the earliest settlers, as memories of those days were still relatively fresh. Among the earlier events recounted was the death of La Salle. The book was banned for a while due to criticism of government and religious figures. Bossu's account provides one of the better looks at the Louisiana Territory while still under French authority. Priced at €2,500 (Euros, or approximate U.S. equivalent of $3,240).

Item 44 is an Italian title, published in Venice in 1789, Storia delle California, opera postuma (History of California, posthumous work). The author was Francesco Clavigero, a Jesuit father who spent thirty years in lower California before the Order was expelled. He died in 1787, two years before this book was published. It focuses primarily on the settlements and natives of Baja California, but also covered is the founding of the mission at San Francisco and missions in what is now Arizona. €5,000 (US $6,467).

Item 39 is Voyage en Californie pour l'observation du passage de Venus... (Voyage to California to observe the transit of Venus) from Jean-Baptiste Chappe d'Auteroche, published in 1772. Chappe d'Auteroche was sent by the French to the Pacific for much the same reason as Captain Cook was sent by the British, to observe the transit of Venus in front of the sun. This information could be used to calculate the then unknown size of the solar system. Chappe d'Auteroche's story is the tale of a race against time to reach the Baja part of California where the transit was to be observed. He would reach his goal just in time to make the mission a success. Sadly, Chappe d'Auteroche contracted an illness two days later and died. This work, like the last, was published posthumously. €10,000 (US $12,937).