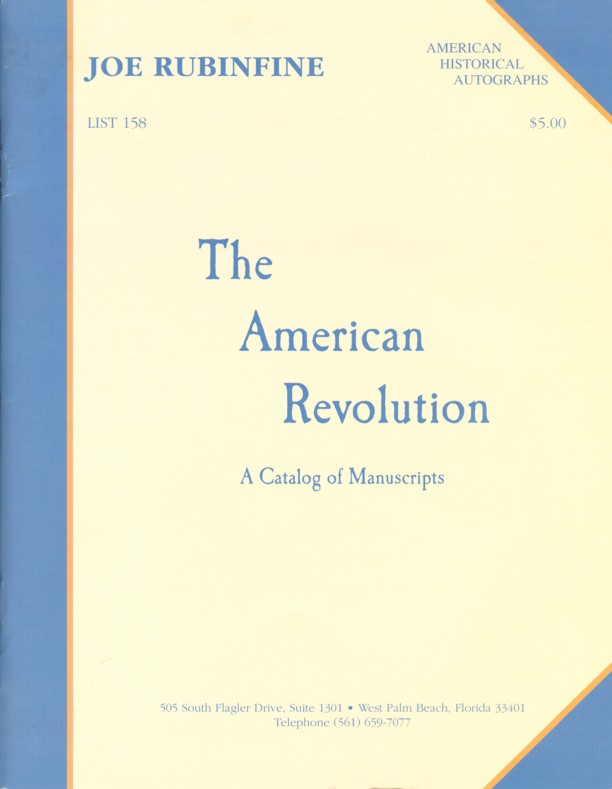 Joe Rubinfine has issued a new catalogue -- The American Revolution. A Catalog of Manuscripts. Rubinfine specializes in American historical autographs, though some of these may not quite be called "American." How about documents produced by British military leaders? Do they qualify as "American" autographs? We will leave that question to the historians. What we can clearly say is that this latest collection offers 89 signed documents pertaining to the American Revolution. Considering how long ago that was, and how few could write in those days, such documents are always difficult to obtain. Among those that we can definitively label "American," they range from lowly foot soldiers bearing the brunt of the fighting to General Washington himself, father of his country. Here are a few.

Item 1 comes from one of those not-Americans who played a critical part in the Revolution, even if his name is not well known. It is a requisition for some ammunition by British Lieutenant-Colonel Francis Smith on August 17, 1771. At the time, Smith was operating out of Quebec. Smith would be in command of British forces in Boston on the fateful day of April 19, 1775. The British were aware that unhappy colonists had weapons stored west of Boston, which they decided to seize before they could be used against them. The result is a plethora of famous expressions from American history: the British are coming and one if by land, two if by sea. Raul Revere began his midnight ride. On reaching Lexington, they were greeted by Minutemen and the shot heard ‘round the world. This was the Battle of Lexington and Concord, and when the dust settled, the British were in retreat back to Boston, the colonists were instilled with defiance and confidence, and the American Revolution had begun. While names of participants such as Revere, Sam Adams, John Hancock, and the Minutemen are remembered well, poor Francis Smith is an obscurity. However, he was the one who led British forces that fateful day, too slowly and with insufficient surprise to achieve their objectives of putting down the rebellion. The rest is history. Smith was wounded on the flight back to Boston, but was praised for his work, promoted, and later took part in the Battle of Long Island and Battle of Rhode Island before returning to England. His earlier document is priced at $1,500.

Item 52 is a sharp warning circa early 1776 from Nathaniel Folsom, Militia General for New Hampshire and a member of the Continental Congress. Rumors were spreading that the mercenary Hessian soldiers were on their way to put down any uprisings in America, and the colonial leaders wanted their troops to be prepared for a possible attack. In this signed circular addressed to Col. Thomas Stickney of the militia, Folsom warns, "By several authenticated accounts lately received, Twelve Thousand or upward of German Troops are on their passage, from England said to be bound for Boston, but as the place they are bound to is not Certainly known it is of great Importance that each Colony be prepared to Oppose them." Folsom goes on to emphasize that the militia must be prepared to gather its troops and arms together on short notice. The Hessians did arrive on American soil in August, but they landed at Long Island. $3,500.