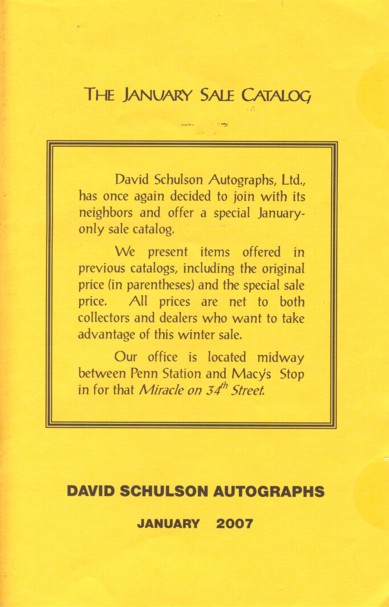 This review may be a day late for a January Sale Catalog, but for those who collect autographs, and aren't too proud to beg for an extension, it is worth a look. The catalogue comes from David Schulson Autographs, Ltd., and the signers come from a variety of fields – arts, music, literature, poetry, science, politics and more. While Schulson describes the business as "autographs," few are just autographs and nothing more. The great majority are complete documents, primarily letters, but also contracts and signed photographs. And, though Schulson Autographs is located in New York, more of this group comes from the pens of Europeans than Americans. Here are a few samples from this latest collection.

Here is a humorous letter, though a shocking one would have been more appropriate for this writer. The letter comes from French physicist Andre Ampere. Ampere engaged in pioneering work on electromagnetism and electrical currents. The measure of electric current, the ampere, more commonly known as the "amp," is named for him. The letter relays an invitation to M. Lemoir, deputy office manager at the Ministry of Interior, from Pierre Ballanche, a philosopher. "His majesty Balanche," writes Ampere (in French), "orders you there or face death..." Had these words been written during the French Revolution, they probably would have scared poor Lemoir out of his skin, but by 1828, a sense of humor had returned to France. Item 1. Priced at $1,325.

Item 90 is a most striking letter from famed playwright George Bernard Shaw. Written in 1908, the 50-something year-old Shaw rebukes the flirtatious, Shaw-obsessed Erica Cotterill, several decades his junior. She practically stalked Shaw, but for whatever reason, he was friendly and communicative (perhaps encouraging) with her, while apparently managing to withstand her advances. Writes Shaw, "Now that I have taught you some respect for business and the law, let me assure you that marriage is more sacred then either, and that unless you are prepared to treat my wife with absolute loyalty, you will be hurled into outer darkness for ever. The privilege of pawing me, such as it is, is hers exclusively." Shaw continues, "You are a luxurious young devil, with the ethics, and something of the figure, of an anteater; and I have no doubt you can coax your mother & your Rupert [Brooke] by crawling all over them; but if you dare to try those tactics with me in my wife's house you will be very startlingly awakened to the iron laws of domestic honor. Also, it is not sensible nor decent to write about such demonstrations except to men of your own time of life..." He concludes, "Remember that your best behavior will not be too good for me, as you hardly yet know how to behave yourself at all, being the very worst brought-up young woman I have ever met in the course of my half century of 'taking notice.'" Shaw has been noted for having unusual relationships with women, and this letter certainly fits that image. $2,760.