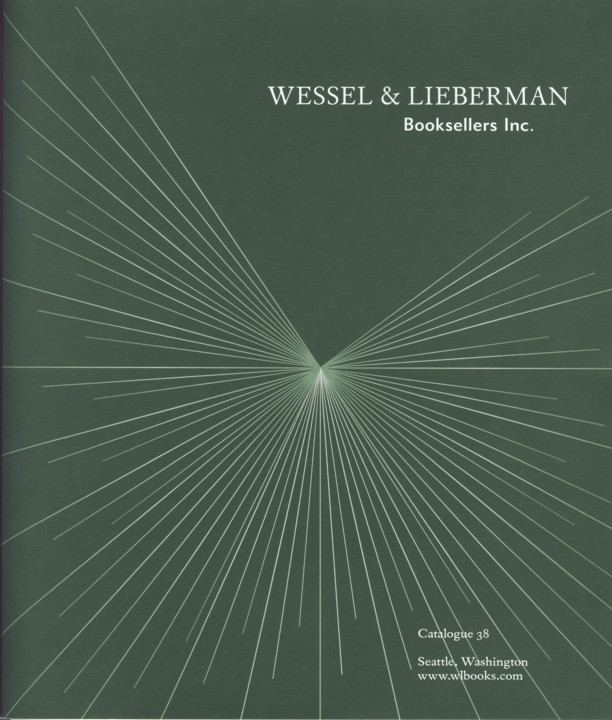 The latest catalogue from Wessel and Lieberman Booksellers recently arrived in our mailbox. This is Catalogue 38 for the Seattle, Washington, booksellers, and it covers a variety of subjects. They describe it as a general catalogue, composed primarily of recent acquisitions. However, it is broken into several sections, with headings such as art, books about books, literature, children's books, science, and the Pacific Northwest. It offers a varied collection with something appropriate for most collectors. Here are a few samples of what is available.

Here is a hard item to pigeonhole. It's not a children's book, and yet its subject is Beatrix Potter. This is a 1998 limited edition of Marseilles, Genoa & Pisa: A Beatrix Potter Photograph Album Representing a Pictorial Biography. It includes numerous photographs of Ms. Potter, most attributed to her father, Rupert Potter. Of course as we all know, poor Peter Rabbit's father didn't live long enough to create such a photographic biography of his child. Item 47. Priced at $275.

Actually, when you think of it, how many children's books use photography? Whether it's Beatrix Potter, Dr. Seuss or Disney, photographs aren't available for the typical children's tale. Well here's an answer -- at least 1,400! This book is From the Mundane to the Magical: Photographically Illustrated Children's Books, 1854-1945 and Beyond. Published by Dawson's Book Shop in 1999, this bibliography by Mus White records over 1,400 children's books illustrated with photographs, and includes 57 photos. Item 52. $160.

Here is a fine piece of ephemera for collectors of either D.H Lawrence or Dorothy Richardson. Lawrence needs no introduction, while Richardson, who has been described as "the genius they forgot," was the first writer whose work was described as "stream of consciousness." Item 79 is a 1926 postcard from Lawrence to Richardson, inviting her to tea. Writes Lawrence, "Excuse card -- got no envelope. -- wonder if you & Odle would care to come to tea Sunday." Odle was Richardson's husband Alan Odle, an artist and illustrator. $375.

Item 120 is a very special item for Americana collectors at the highest (wealthiest) levels. It is the Aaron Arrowsmith map A Map Exhibiting all the Discoveries in the Interior Parts of North America… This copy is the 1802 revision of the map originally published in 1795. It opens to approximately 57" x 48" and is colored by a contemporary hand. This map (not this particular copy) is the one Jefferson and Lewis would have used in plotting out Lewis and Clark's journey into the American Northwest, and Lewis took it on that famous trip. It was the best map available at the time, Arrowsmith having had assistance from Peter Fidler of the Hudson's Bay Company, which had the earliest white presence in the territory. Wessel and Lieberman note that no copy of this seminal map has been offered for public sale in over 50 years. $115,000.