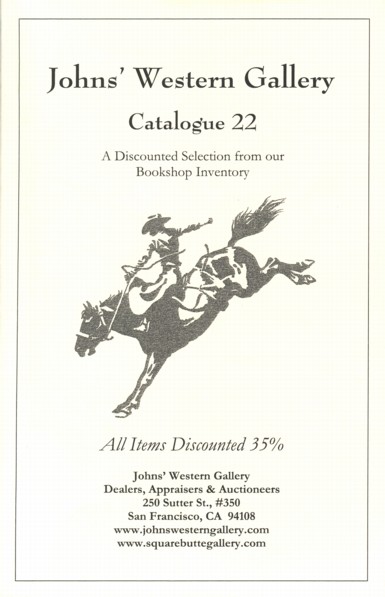 Johns' Western Gallery, a notable west coast auction house and bookseller, has issued a catalogue of discounted goods. It's called A Discounted Selection from our Bookshop Inventory, though much of what you will find is more ephemera than books. This is a catalogue filled with material from the Old West, but one designed for collections wider than just books. There are handbills, receipts, stock certificates, checks, manuscripts, letters and other correspondence, photographs, maps and catalogues. And, there are books too. Those who find antiquarian books a window on the past will enjoy this catalogue, for it throws open the gates to all types of western memorabilia, while not straying too far from the type of ephemeral material generally associated with books. What is particularly agreeable about this material is that it is mostly unusual and rare, if not one of a kind, yet affordable to virtually any collector. And if it wasn't already sufficiently inexpensive, it has all been marked down 35% before being listed. Here are a few examples of what is to be found.

Here's a seemingly trivial item -- Richard Garvey's telephone bill. However, those who grew up in the Garvey School District of the San Gabriel Valley may find the phone bill of the namesake of their alma mater a bit more interesting. Garvey was a wealthy landowner who donated property for the district's first school. Still, there's something else even more intriguing here -- the date. Garvey's bill is dated February 1, 1886. Did they have phones in rural areas outside of Los Angeles in 1886? Evidently, but Garvey's must have been one of the first. According to Leonard and Dale Pitt's "Los Angeles A to Z," the first telephone was installed in L.A. in 1882. This early phone bill was issued by the Sunset Telephone & Telegraph Company. Sunset would eventually be absorbed by Pacific Bell. Item 171. $42.

Item 359 is a circa 1900 photograph by a then young Earle Forrest, later to become a noted writer of the Southwest. It is a picture of the house at 1318 Lafayette Street, St. Joseph, Missouri. Why this house? This is the home where noted outlaw Jesse James was shot and killed in 1882. It stands today, still a curiosity a century later. $42.

Fast forward half a century and Earle Forrest has a book with a later Lewis and Clark connection. The book is Patrick Gass: Lewis and Clark's Last Man. With the war records of descendants of Patrick Gass in World War I and World War II, published in 1950. Gass was a skilled carpenter with 15 years service in the army when he signed up for Lewis and Clark's expedition. He was elevated to sergeant during the journey when one of its three sergeants died. On return, Gass is best remembered for publishing the first account of the expedition by a participant. His book was released in 1807, seven years before the official account. Though hardly the youngest, Gass was the last survivor of the expedition, passing on in 1870 at the age of 98. Forrest's book then takes us on to the war careers of his descendants (Gass fought in the War of 1812). Item 427. $228.