Treasures from the Attic of the 19th Century Shop 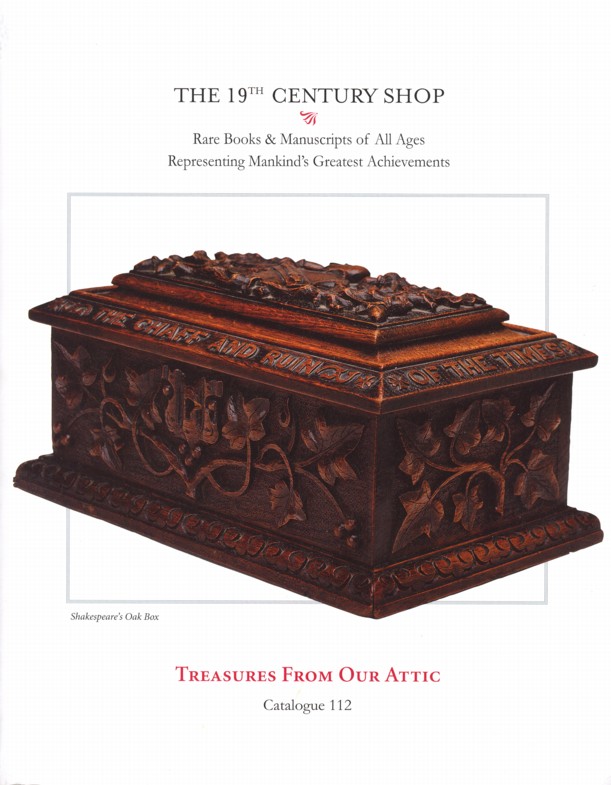 Treasures from the Attic of the 19th Century Shop

The 19th Century Shop has issued a catalogue of Treasures From Our Attic. Everyone dreams of finding valuable old books in their attic, but few are as fortunate as the 19th Century Shop. Perhaps that's because few of us were already in the book trade when we filled the attic. The 19th Century Shop recently moved to Stevenson, Maryland, just north of Baltimore, which is what led to this search of their attic. There were some wonderful books and ephemera hanging around up there, some of which had not been offered for sale in nearly two decades. To this, they have added some more recent acquisitions to fill this current catalogue.

The catalogue is broken into three topics. The first is Americana, followed by Literature, and finally, Varia. Here are some of the over 500 items that have been dusted off and presented for sale.

"I shot an arrow into the air / It fell to earth I know not where." Those lines, the beginning of the poem The Arrow and the Song, are probably familiar to just about everyone. The writer was Henry Wadsworth Longfellow, and on November 18,1880, he hand wrote a copy of the poem, signed and dated it. This is not the original copy, the poem having been written 35 years earlier, but it is in Longfellow's easily readable script. Item 322. Priced at $7,500.

Here is an inscribed copy of Poems, a collection from a writer who is remembered for just one of his works, "A Visit from St. Nicholas" (aka "The Night Before Christmas"). The author was Clement Moore, a Columbia University professor and noted scholar of Greek and Hebrew in the early to mid 19th century. Indeed, he was probably best known through much of his life for his other notable work, a Hebrew-English dictionary he compiled. The incongruity of this man being the author of a work such "A Visit" has led many to question whether he really did write the poem. When it was first published, in a Troy, New York, newspaper, no author was given. However, Moore was not shy later on about claiming authorship, even if it does seem an aberration. Item 346 is Moore's 1844 Poems, with an inscription from "the author" (presumably Moore!). $12,000.

Here is an unusual connection to one of America's greatest poets, Edgar Allan Poe. This is a collection of nine issues of The Repertory, a Boston theater publication, from 1807-1809. You may be wondering what this could have to do with Poe, considering young Edgar was still in diapers at the time. Well, his parents were actors, and their names show up repeatedly in this publication. David Poe appears for his role in "Country Girl" just two weeks after Edgar's birth; Elizabeth for "False Alarms" a month after he was born. The two appeared together in 1807 in Shakespeare's "King Lear," when the great poet was still inconceivable and unconceived. Item 371. $850.