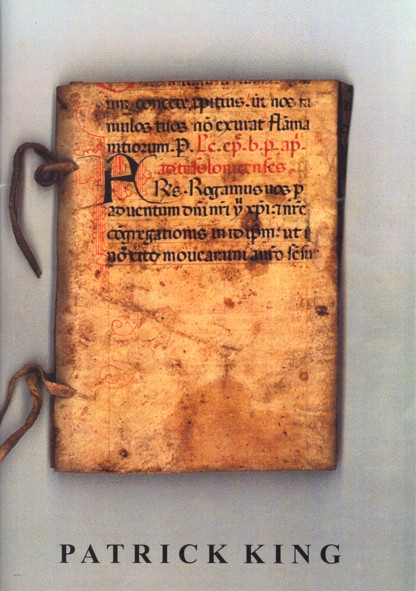 This month we review our first catalogue from Patrick King Rare Books of Stony Stratford, UK. It is titled merely Bulletin 43, but that is sufficient since this catalogue is not targeted to a particular subject. The material is generally British in origin, though much of it extends far beyond those shores. For example, collectors of Americana will find this catalogue of great interest as many of the works touch on the area which was, after all, once a British colony. Sometimes items related to America that are hard to find in America can show up continents away. Here are a few of the titles offered within these pages.

Here is an 1829 Liverpool annual with an article by one of the most collectible of Americans, John James Audubon. The publication is The Winter's Wreath, a Collection of Original Contributions in Prose and Verse. It is composed mainly of works by local writers and artists. However, Audubon was in Liverpool during 1827, and spent Christmas at the home of the brother of this publication's editor. This probably led to the not-yet famous ornithologist being persuaded to contribute a piece. Audubon's article in entitled Journey up the Mississippi, and it recalls a trip he made on the river in 1810, culminating in a swan hunt (Audubon hunted swans?) with local Indians. Item 4. £350 (British pounds, or roughly US $676).

Speaking of Liverpool, it was probably a fairly calm place when Audubon visited it, but that would not be the case on January 6 and 7 of 1839. On the night of January 6, Liverpool was hit by a terrible storm, called a "hurricane," though the odds of what we today consider a "hurricane," a storm arising in the tropics, hitting as far north as Liverpool, and in January no less, seem highly remote. Still, it was a horrible storm that was described in the Narrative of the Dreadful Disasters occasioned by the Hurricane, which visited Liverpool... Roofs were torn off of homes, trees uprooted, houses encrusted in salt spray, and 100 people on ships in the harbor lost their lives. This report, compiled just a week after the storm, provides a detailed account of the devastation. Item 66. £165 (US $319).

Item 150 concerns the discoverer of America, and no, he did not sail in 1492, and his name is not Columbus. Actually, he preceded that usurper by three centuries. The book is An Enquiry into the Truth of the Tradition, Concerning the Discovery of America, by Prince Madog ab Owen Gwynedd, about the Year, 1170... The author of this 1791 polemic is John Williams, a believer in the Madog, or Madoc tale. Madoc was supposedly a prince, son of the King of Wales. During battles over who would succeed his father when the latter died, Madoc decided to lead a group of sailors to sea. They discovered something of a utopian new world, some say in Florida, others the Gulf Coast. Madoc returned to Wales and rounded up more settlers and returned to America, or whatever it was called at the time. They were never heard from again. Supposedly they eventually moved up the Mississippi and mingled with various Indian tribes. No one knows exactly where the story began, but it started appearing in the 16th century, and Welsh pride, and English interests in showing a pre-existing claim to North America, spurred it on. Many early Americans tried to figure out which Indians were partly Welsh, with legends arising of natives who spoke Welsh. Perhaps the last notable supporter of this theory was famed Indian artist George Catlin, who believed the Mandans partly descended from the Welsh settlers. However, the lack of substantial evidence of any such visiting, nor that Madoc ever made such a journey, has left most historians to conclude the tale is a myth. Perhaps this book will help you decide. £450 (US $870).