The Polar Regions from Aquila Books 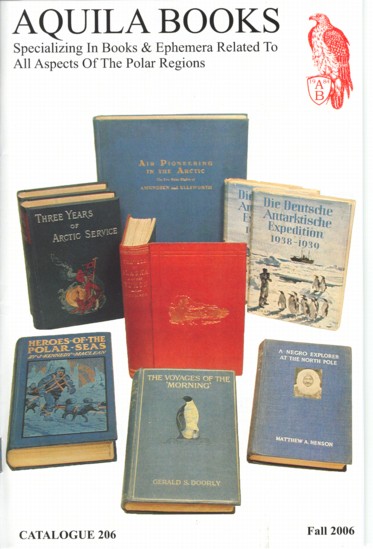 The Polar Regions from Aquila Books

By February, the snow outside has turned from delightful to oppressive. Most have become tired of bone-chilling cold, the icy landscape, the boots and heavy overcoats. Well, if the theory is correct that hearing how others are suffering even worse than you makes things better, here is the perfect catalogue. This is Catalogue 206 from Aquila Books. Their specialty is "books and ephemera related to all aspects of the polar regions." Here you will read the adventures of people who braved the bitterest of cold, some of the worst natural elements to be found on earth. Minneapolis seemed like Miami to this group, and they did not have highly insulated homes and powerful furnaces to carry them through the harsh nights. So turn up the thermostat, pull up a warm blanket, and hear some of the stories that would curl even Sergeant Preston's toes, brought to you courtesy of Aquila Books of the warm and balmy town of Calgary, Alberta, Canada.

Among the areas visited by this catalogue are the Arctic, Alaska, Yukon and other territories of the Canadian north, Greenland and Antarctica. Two of the most common subjects are the attempts to reach the two poles, neither achieved until the twentieth century, and the incessant and almost always unsuccessful attempts to discover a northwest passage to the Pacific Ocean. An offshoot of the latter topic was the many attempts to find the lost northwest expedition of Sir John Franklin. It would take many years and attempts to finally discover what happened to Franklin's ill-fated mission of 1845. Here, then, are a few examples of the material Aquila has to offer.

We will ease into the arctic to avoid too much cold shock. Item 32 is the official report of the last of Captain Cook's three voyages, A Voyage to the Pacific Ocean. Cook did most of his exploring in the southern hemisphere, learning much about Australia and determining there was no massive southern polar continent as once believed. Nonetheless, one of the aims of his final voyage was to find a northwest passage, except unlike most explorers, he was to proceed from the Pacific to the Atlantic, rather than the other way around. However, Cook, unlike the Atlantic explorers, got to winter in Hawaii. His expedition made it through the Bering Strait in 1778, but was forced back that winter by ice. Unfortunately, Cook's return to paradise turned out to be a personal disaster. He was killed by Hawaiian islanders over some seemingly minor disputes. This three-volume plus an atlas set, finished by Captain James King in 1784, is priced at $19,500.

The search for Franklin spurred on the first serious American exploration of the Arctic. The tale of this expedition is retold by its leader, Elisha Kane, in The Arctic Explorations. The Second Grinnell Expedition in Search of Sir John Franklin, 1853, '54, '55. Financed by shipping magnate Henry Grinnell (hence the expedition's name), Kane led his crew north of Baffin Bay and deep into the Arctic. There, the ship was frozen in. They would send out exploratory teams, including one which saw open sea to the north, furthering the belief that there was an open polar sea. The following year, a large group of Kane's men would attempt to leave the expedition and escape to Greenland, only to be forced back to ship by the elements. Ultimately, they all escaped on smaller boats during the summer of 1855, being picked up by a Danish whaling ship. They never found a trace of Franklin. This two-volume account of their harrowing story is item 64. $500.