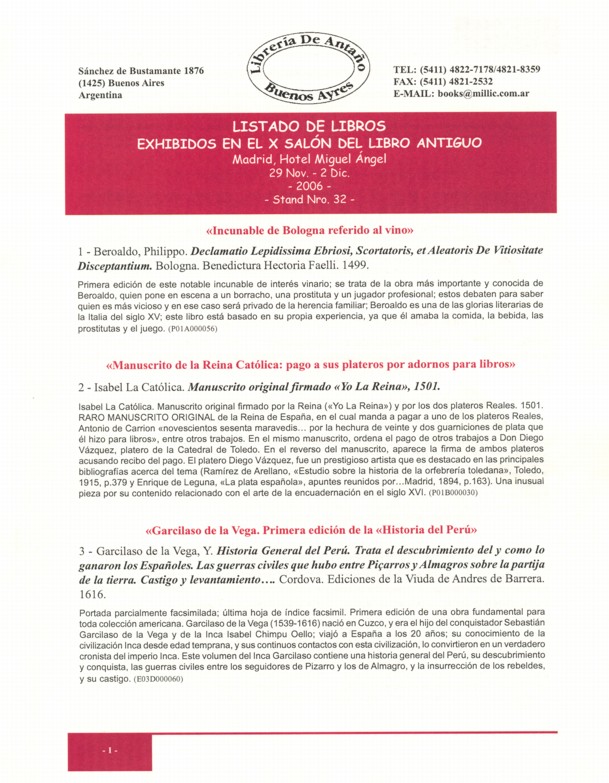 As the title of this catalogue suggests, it is intended for those proficient in the Spanish language. That eliminates this reviewer. Generally, catalogues from Libreria de Antano are at least partly in English, but this one was printed in conjunction with the recent Madrid book fair. A catalogue of primarily Spanish language books for a Spanish audience is, naturally, going to be written in a language other than English, or even French for that matter. However, there are a few books offered that are in English, and I will try to describe those and a few others so that those with skills in more languages than I will have a sense of what is available.

Item 26 is an uncommon book by Henry Swinburne entitled Pictureque Tour Through Spain. Swinbourne toured Spain in 1775-76 and wrote a book about it a few years later. However, this title was published in 1806 and is a first edition. It is a folio size book published in an atlas format. Along with some text, it features a map of Spain and 20 illustrations. There are images of Madrid, Toledo, Seville, Barcelona, a couple of old castles, a bridge and a tower and more. Priced at $4,200.

Item 28 is Travels in the Interior of Brazil...by John Mawe. Mawe traveled from England to South America in 1805, and after temporarily finding himself imprisoned as a British spy during a conflict between his homeland and Spain, made his way to Brazil. Mawe was a mineralogist, so he journeyed inland to observe the country's gold and diamond mines in the state of Minas Gerais. This was a notable report as the Portuguese rarely allowed foreigners to gather information about mines in their colony. This first edition was published in 1812, and contains a map and eight plates. $4,250

Item 12 is Antonio de Solis' Historia de la Conquista de Mexico...published in 1684. Solis was a one-time playwright who took on a more serious role as a government official and traveled to Mexico to write about Spain's colony. He was an admirer of the brutal conquistador Hernan Cortes, which probably helped make this book quite popular, but despite his views this is one of the better histories available of Mexico at the time. $8,950.

Item 63 is one of several items from the great Argentine writer Jorge Luis Borges, El Aleph, published in 1949. It is a collection of short stories, including one of the same title as the book. In the story, the Aleph is a small brilliant point within which can be seen everything in the universe. It fits the theme of the infinite Borges would return to many times in his career. This copy is a first edition. $6,400. As an aside, it was a couple of Borges manuscripts, valued at almost $1 million, that a Boston bookseller recently reported stolen, only to discover the following day tucked behind a picture. It gave both Borges and the bookseller some notice in the press, though perhaps not the type the latter would have preferred.

There are many more books in this catalogue, but I will leave the rest to those who do not struggle with the language. You may contact Libreria de Antano at books@millic.com.ar, telephone (5411) 4822-7178.