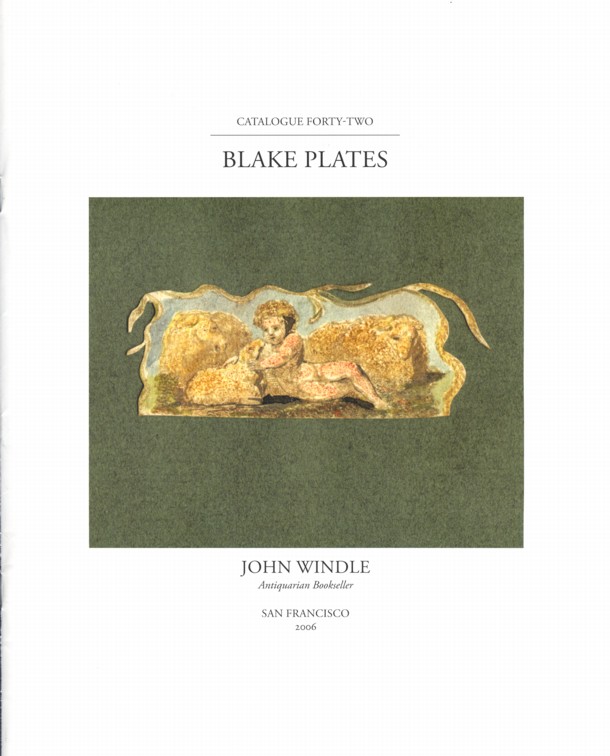 This catalogue is for collectors of William Blake, the 18th-19th century artist-illustrator-engraver-poet whose admirers are among the most passionate known to man. Blake is one of the hardest people to place. As an artist and poet, he was more his own man than a follower of some particular school. Besides which, how many people are both visual artists and poets? He was certainly an eccentric man, some would say mad. As a youth he saw religious visions, yet he would become an opponent of most organized religion and a follower of radical politics. His intensity matched those of his present-day admirers. His work has been considered everything from fair to perhaps the greatest art ever produced. John Windle, Antiquarian Bookseller, who produced this catalogue, is undoubtedly closest to the latter point of view. He has long specialized in Blake, and has provided a major source of material for those in awe of his work.

Windle's 42nd catalogue is a collection of Blake Plates, 93 in all. There are plates available for just about any budget. In his introduction, Windle notes, "It still astonishes me that original prints by an artist who is regularly ranked with Durer, Rembrandt, and Goya as one of the great masters of the medium can be purchased for nominal sums." If Blake's work is surprisingly affordable today, it was even more so in his time. His reputation took a long time to develop. During his lifetime, Blake was never highly respected nor rewarded financially, generally depending on a benefactor or two to enable him to earn a living. Then again, a lack of recognition in one's lifetime is hardly unusual for great artists.

Included in the catalogue is a range of prints from early engravings made by Blake to some of his finest original art. There are 25 Blake illustrations taken from his 1825 Book of Job. This was the last series Blake completed, it having been commissioned by his friend John Linnell in 1823, essentially to enable Blake to support himself. The drawings are quintessentially Blake, otherworldly and spiritual. Blake, with his own share of struggle in attempting to understand God, surely could have related to poor Job.

There are four impressions from Blake's two books of poetry, Songs of Innocence and Songs of Experience, originally published in 1789 and 1794. Included are plates from the Nurse's Song, different versions of which appeared in the Songs of Innocence vs. Experience. In the former, the nurse is herself childlike, joyful and sympathetic to the playfulness of the children in her care. In the latter, she is cynical and embittered, seeing their play as a waste of time. Five years of raising children can do this to you.

Twelve images are from Dante's Divine Comedy. This was Blake's final work, as he died in 1827, after completing just seven. The twelve here offered of necessity means that some are available in multiple copies. As with Job, John Linnell commissioned this final work of Blake, who had worked on many drawings for the book, but had completed the engraving of just the seven.

Shown on the front cover is an image of Spring, taken from the Songs of Innocence. John Windle Antiquarian Bookseller may be found online at www.johnwindle.com, telephone 415-986-5826.