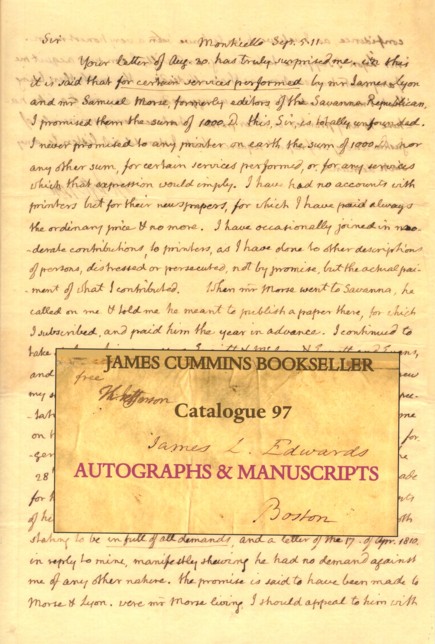 James Cummins Bookseller has issued a new catalogue of Autographs and Manuscripts. This is a most diverse collection, save for the common theme of the writer's autograph. Represented are writers, cartoonists, actors, monarchs, presidents, politicians, scientists, poets, explorers, musicians, photographers, and one of the most horrific war criminals the civilized world has ever known. Here are a few of these varied signed items.

We occasionally come across Hemingway letters, and like his books, they are always entertaining. However, item 56 is a bit far out even for him. In March of 1942, the Brooklyn Dodgers baseball team was attending spring training in Cuba, Hemingway's home at the time. "Papa" would hang out around the ball field, and one night, invited a bunch of players over to his house. Hemingway evidently got a bit drunk, which turned him from friendly to mean. He challenged one the Dodgers, Hugh Casey, to a fight. Casey was a tough customer, noted for brushing back opposing batters, but Hemingway was also a large man. Casey was not looking to box the famed writer, but Hemingway insisted. They went for five one-minute rounds in Hemingway's living room, and Casey apparently got somewhat the better of it, though the writer held his own. The following day, Hemingway wrote this letter to his trainer, George Brown, asking Brown to help get him in shape for a rematch. Writes Hemingway, "We went five one-minute ones last night and I was under the impression that I needed a lot of work in order to come up against Casey again." He then continues, "I had him down twice and he hit me with everything he had all the time and it didn't do me any harm." In a P.S., Hemingway adds, "Don't say anything about the Casey business. REALLY. It was one of those good ones not the publicity kind." Both Hemingway and Casey were at the top of their game at the time. Hemingway was a very popular novelist, Casey one of baseball's top relief pitchers. Ironically, neither could handle the slide when their careers wound down. Both would commit suicide by shooting themselves, Casey in 1951 amid a paternity scandal and the end of his baseball career, Hemingway a decade later while suffering from poor health and a declining career. His 1942 letter is priced at $12,500.

Item 45 is a very early document for U.S. California collectors. It is an appointment to the Legislative Council signed by then Governor John C. Fremont, better known for his explorations of the area, on January 22, 1847. Fremont had signed the Treaty of Cahuenga just nine days earlier, securing California for the United States. Fremont was appointed Governor by Navy Commodore Stockton, but his appointment did not last long. Washington appointed General Stephen Kearny to the position, and when Fremont did not follow his commands, he was arrested and convicted of mutiny. Fremont would be pardoned by President Polk, and would go on to be the first presidential nominee of the Republican Party, losing to James Buchanan in 1856. Apparently, Fremont was not terribly concerned about who might serve on the Legislative Council. This appointment sheet has a blank space for the name of the appointee, even though Fremont had already signed it. $30,000.