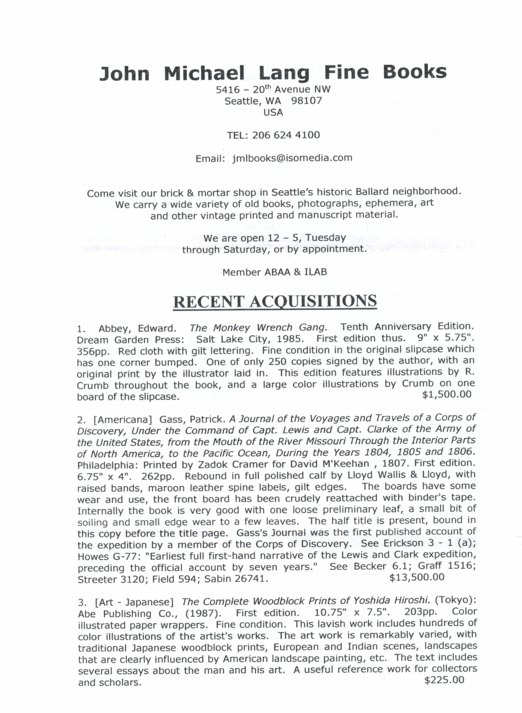 A pamphlet of Recent Acquisitions has just been received from John Michael Lang Fine Books. This could be described as a general listing, since the books do not follow a particular theme. There is certainly a concentration of works from the Pacific Northwest, as befitting a bookseller from Seattle. However, this is no limitation. For example, Lang has a copy of Charles Goodspeed's biography, Yankee Bookseller. Yankee booksellers are not to be found in Seattle. The legendary Goodspeed's bookshop was located in Boston. Here are a few of Lang's most recent acquisitions.

This book would certainly have to be described as related to the Pacific Northwest, though it was printed in Pittsburgh. Actually, that was probably as far west as you could find a printer in 1807. Item 2 is Patrick Gass' A Journal of the Voyages of a Corps of Discovery, Under the Command of Capt. Lewis and Capt. Clarke... This is the first edition of the first book on Lewis and Clark's famous journey by a participant in the expedition. The travelers were not supposed to jump the gun on the official account, but it took eight years for that book to be released. Meanwhile, Gass brought the earliest eyewitness account of the unknown Northwest to his countrymen. Priced at $13,500.

Item 12 is With a Quiet Heart. An Autobiography of Eva Le Gallienne. Born in London at the turn of the century, she came to America at the age of 16, and by the 1920s, was a successful Broadway actress. Le Gallienne was involved in numerous lesbian love affairs along the way, plus a brief fling with actor Basil Rathbone. While the number of plays in which she appeared declined after the 1920s, she continued acting through most of her life. She would also later appear in an occasional film or television program, and in 1980, at the age of 81, she became the oldest person to secure an Academy Award nomination, being nominated for best supporting actress in "Resurrection." She died in 1991, at the age of 92. However, this biography misses the last 40 years of her life, having been published in 1953. This copy is signed and inscribed to Alma Kruger, a fellow actress, thirty years La Gallienne's senior, who generally played matronly roles. $60.

Here is a quite obscure cookbook: Recipes and Domestic Service: the Mahammitt School of Cookery. The author, Sarah Helen Tolliver Mahammitt, was a Black woman from Nebraska, and there cannot have been too many Black women authors in 1939 Nebraska. Mrs. Mahammitt evidently had been a caterer for 30 years, and wished to share her recipes, some of which were her own. It does not appear that the book was targeted specifically to the Black community, but to anyone who likes to eat. Item 8. $125. For a bit more unusual cookbook, there is The Official Handbook for the National Training School of Cookery, an 1881 London imprint. Among the recipes are "stewed ox cheek, brain cakes, toad in the hole, and sheep's head." I think this cookbook may be more suitable for collecting than for actual use. Item 9. $125.