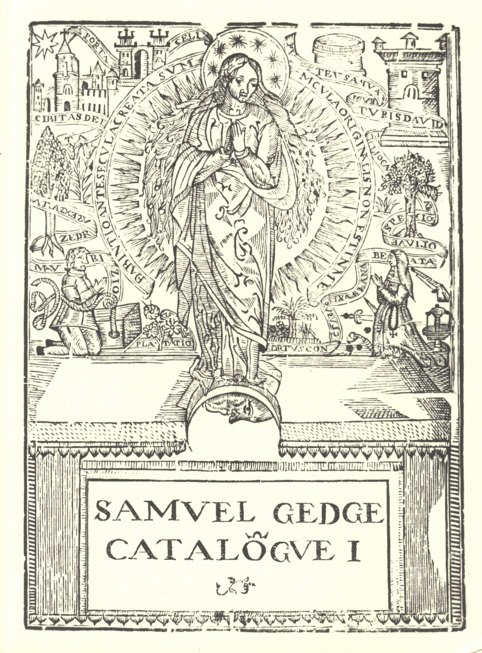 We recently received Catalogue I from U.K. bookseller Samuel Gedge, Ltd. Recently established in Mundesley, Norfolk, Samuel Gedge and Ernesta Campaner apply their expertise in English and Italian books and manuscripts prior to 1850 to the trade. However, as you will see from some of the titles, their offerings extend farther than that might imply, as some of these books connect to areas all over the world. Samuel Gedge Ltd. has put together a collection of unusual and often quite rare titles that will cover the interests of many different collectors.

Among the types of books found in Gedge's first catalogue are those designed to help English speakers navigate various foreign languages. Others provide guidebooks to foreign lands, or a guidebook for outsiders to England itself. There are very early schoolbooks, and a large collection of works pertaining to plagues in Italy during the early 17th century. Violations of various quarantines were punishable by death. The cures offered were often entertaining, though hardly effective. Between the punishments, cures, and the plague itself, this was a very dangerous time. Here are a few of the works you will find in this most interesting new catalogue.

Rimedi preservativi... is a 1630 translation of remedies for the plague by the French physician Auger Ferrier. Ferrier was the personal physician of Catherine de Medici, and in accordance with the beliefs of the times, liberally recommended blood-letting. However, in credit to Ferrier, he had figured out that many "cures" were spurious. As Gedge notes, he advised against, "mercury pills, urine drinking, scorpion oil and ashes of frogs." Out of that bunch, I guess the overdone frogs legs sound best, but antibiotics were truly a major step forward. Item 77. Priced at £550 (US equivalent of approximately $1,077).

If you are planning a trip to Rome, The Antiquarian or the Guide for Foreigners to go the Rounds of the Antiquities of Rome, by Angelo Dalmazzoni should help. The guide dates to 1803, but presumably the antiquities haven't changed. Dalmazzoni, himself a personal guide, notes that while there are many other such books, they are all "copied one from another," and all contain "the same unbecoming praises, the same faults, and equally want exactness, brevity and erudition." His, obviously, is better, though today very scarce. Item 23. £1,400 ($2,741).

Here is an even more fascinating guidebook for Englishmen who did not plan on traveling quite so far. Published in 1780 by an author who preferred to remain anonymous, the title is Characters of the Present Most Celebrated Courtezans. Interspersed with a Variety of Secret Anecdotes Never Before Published. This is a most useful reference book for gentlemen, something of a Consumers' Report for the trade. For the once lovely Mrs. B-dd-y, we are told, "...the utmost stretch of human imagination is inadequate to conceive any thing more delicately lovely than the tout ensemble of this adorable girl...the wretched vestiges of which are scarcely to be treated in the present emaciated remains of Mrs. B-dd-y...her eyesight is decayed, her memory extinct, and her whole frame relaxed to a degree of almost infantile imbecility, by a dreadful indulgence in love, liquor, lust, and laudanum..." Mrs. F-rr-r fares little better.