More Books From The Book Arts By Oak Knoll 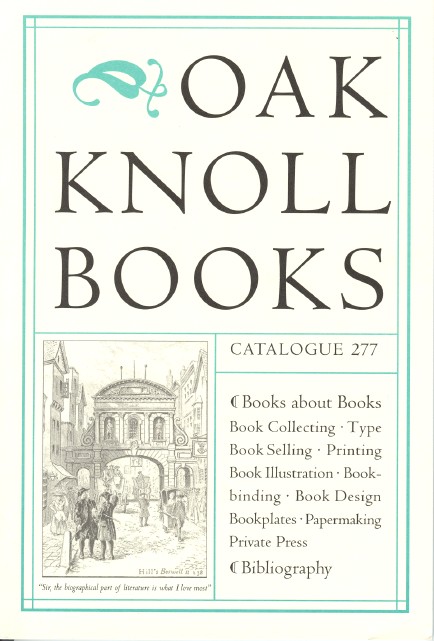 More Books From The Book Arts By Oak Knoll

Catalogue number 277 from Oak Knoll Books will not break any new ground for the Delaware bookseller, but that is probably just fine with people who appreciate the material they offer. Oak Knoll is a specialist in the field of "books about books," and their catalogues usually provide large selections of material in this field. Catalogue 277 lists over 800 items, and most pertain to the book arts -- printing, binding, paper, limited editions, type, book selling, book collectors and the like. There is also a separate section dedicated specifically to bibliography. Here are just a few samples from this extensive collection of titles from the world of book arts.

We will start with an old item about a much older written work. Item 211 is The Moabite Stone, a report about this very early writing by Christian Ginsburg. The Moabite Stone, discovered in 1868, tells about the triumphs of Moabite King Mesha in the 9th century BC. Mesha claims victory in a rebellion over the Israelites, who still controlled this territory in present-day Jordan at the time. Since this writing evidently presents Mesha's point of view, it may exaggerate that King's exploits. This book, published in 1871, just three years after the stone's discovery, includes translations in several languages, maps, and a lengthy introduction. Unfortunately, there is little else known about King Mesha, so the accuracy of the stone's claims is uncertain. Priced at $150.

In another time, one of the more adventurous of occupations was that of the whaler. George Francis Dow presents a look at this livelihood in Whale Ships and Whaling. A Pictorial History of Whaling during Three Centuries… It includes photographs of ships, spears, scrimshaw (carvings from whalebones) along with accounts of whaling expeditions. The book was published in 1925 by the Marine Research Society of Salem, Massachusetts. While we weren't sure how this exciting book made its way into this catalogue, we imagine it is because of its connection to a collection, the "Allan Forbes Collection of Whaling Pictures." Forbes was a collector in the field, and his collection was donated to the MIT (Massachusetts Institute of Technology) Museum in 1940 (now part of the Hart Nautical Collection). Item 154. $85.

Here is a set of Hawthorne's works that comes with a most impressive provenance. It is the 13-volume Complete Works of Nathaniel Hawthorne, published in 1883. This large paper edition was limited to 250 copies. It contains the bookplate of Robert Hoe III, one of the foremost book collectors America ever saw. Hoe inherited R. Hoe & Co., the foremost manufacturer of printing presses in America during the 19th century. This innovative manufacturer, formed by his namesake grandfather in 1805, earned Hoe the money to put together one of the greatest private collections America has seen. Two years after he died in 1909, Hoe's collection went up for auction. It was spectacular. The proceeds exceeded those of any previous American book auction by several times. It is still regarded as one of the most important book auctions ever. So what ever happened to Hoe's company?