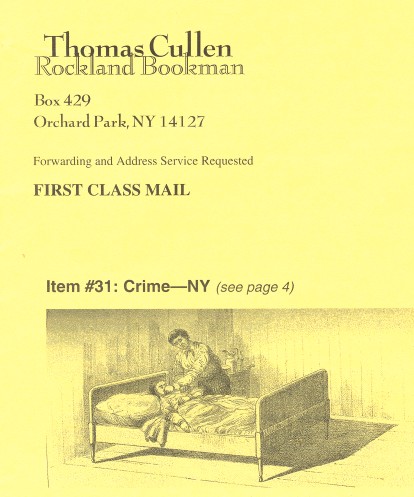 Thomas Cullen, Rockland Bookman has issued his 41st catalogue of Manuscripts and Books. Cullen offers a mix of material, hard to easily pin down. There is a concentration of local materials from the northeastern states, but other items take us into the Midwest and southern states as well, and even Canada and England. One thing that can definitely be said is that you will find a great deal of manuscript material here. These include diaries and business ledgers, and they provide a clear look at American life from the late 18th and 19th centuries. Most provide glimpses of country life, rather than that of the big cities (of course, not too many Americans lived in big cities at that time). However, we caution that this does not cover everything in this catalogue. There is material scattered across many other subjects, from art and antiquity to the West and the World Wars. Here are a few samples from the latest catalogue from Thomas Cullen.

Item 18 is an enormous collection of correspondence, photographs, contracts and the like from sculptor Leonard Volk, his son, artist Douglas Volk, and their families. Leonard Volk is responsible for perhaps the most important act in preserving the likeness of Abraham Lincoln for future generations. In March of 1860, before Lincoln was nominated for president, Volk had Lincoln sit for the creation of a plaster life mask. It is one of but two Lincoln ever sat for, the other coming two months before his death, and that one has mistakenly been thought a death mask Lincoln had so aged as a result of his difficult years in office. Volk's sculpture is the Lincoln we know. He would later also do a mask of Lincoln's hands, the right slightly larger, Volk explained, because of all of the hand shaking on the campaign trail.

All of this is somewhat surprising and ironic, as Volk's wife was a cousin of Lincoln's principal rival, Stephen A. Douglas. He reportedly met Lincoln at one of the famed Lincoln-Douglas debates. Volk also made a life mask of Douglas, and would go on to create numerous sculptures and monuments to both Illinois political leaders. His son Douglas Volk (named for Stephen Douglas) was a painter of some note himself, particularly notable for portraits, including posthumous ones of Lincoln (reportedly then toddler Douglas Volk was present for the Lincoln sitting). This collection includes hundreds of pieces of correspondence from the two Volks, family photographs, a sketch of the Rochester, New York, Lincoln memorial by Leonard, a seven-page biography of Stephen Douglas by Leonard, and much more. Priced at $9,000.