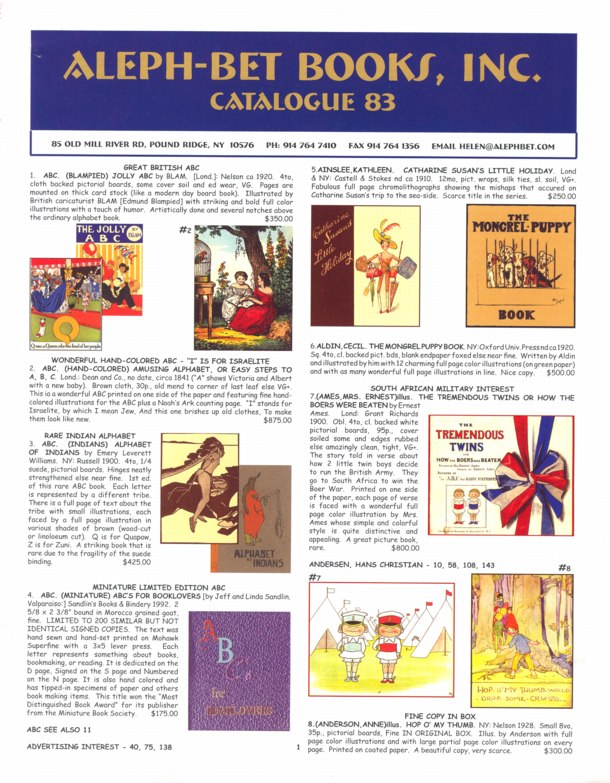 Just in is Catalogue 83 from Aleph-Bet Books. What could be more appropriate to the holiday season than a catalogue full of children's books? Any of these titles would make ideal gifts for your "children," that word being placed in quotation marks because these are really meant for the big kids. These books may have been published with the youngest readers in mind, but at this point, I would not recommend turning them over to sticky fingers with crayons in hand. You can pick up copies for the little ones on Abebooks or Amazon. These copies are meant for those who remember their childhoods, not those still living them. Here are a few of the children's books Aleph-Bet is offering this season.

We will start with what this catalogue might have looked like 120 years ago. It is one of the hard to find McLoughlin Brothers catalogues of Toy Books, Games, Backgammon Boards, Paper Dolls. Who knows, maybe some items in this catalogue were in that one too. However, that is very old. Neither Dorothy nor Peter Rabbit were even born yet, and the Cat in the Hat was still something like 15 cat generations into the future. Item 99. Priced at $600.

Speaking of Peter Rabbit, here is something that most of us can't quite afford, but for those whose investments have multiplied like rabbits, item 120 is a second impression of the first, privately published edition of The Tale of Peter Rabbit, from 1901. Beatrix Potter had sought a regular publisher for her book, but the big publishing companies treated her like Mr. McGregor treated rabbits – disrespectfully. She was forced to publish the book herself. The first impression contained 250 copies, most given away to friends. As Ms. Potter realized the book was more appealing than the publishers believed, she did a second run of 200 copies, of which this is one, in a slightly better binding. Shortly after, Warne agreed to publish the book, but they used only 30 of Ms. Potter's illustrations. As a result, eleven of the illustrations used in the private printing were not used in the later trade editions. $32,500.

Item 89 is The Story of Simpson and Sampson by Munroe Leaf and illustrated by Robert Lawson, from 1941. This book is not about Homer, Jessica, or O.J. Nor does Delilah's main man appear. It is a first edition about a pair of twins, by the author-illustrator duo best known for Ferdinand, the bull who preferred smelling flowers to fighting matadors. $350.

Item 38 is the Story of a Puppet, or the Adventures of Pinocchio, by Carlo Collodi. This 1892 printing is the first English edition of this classic from Italy. It took nine years to be translated to English, but it has been a favorite in the English-speaking world ever since. $8,000.