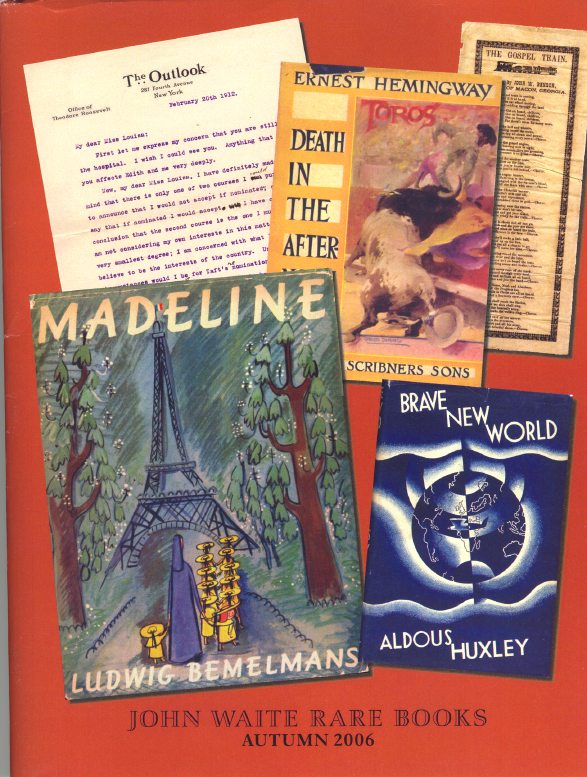 From John Waite Rare Books we have received their Autumn 2006 Catalogue. Waite offers a wide variety of books and manuscripts, along with some photography. A few items reflect their northern New England location, in Ascutney, Vermont. However, most owe no such allegiance, and could as easily be found in a California bookshop. There is history, literature, poetry, "medicine," photography, art, first editions, politics, slavery and abolition, computers, and religion. And there is more. Here are a few samples.

Item 164 is a remarkable collection of sixteen signed letters from Theodore Roosevelt to social reformer Louisa Lee Schuyler. Schuyler was a great-granddaughter of Alexander Hamilton and Revolutionary War General Philip Schuyler, a woman of social status and friend of Roosevelt's father who dedicated much of her life to public causes. A progressive like Roosevelt, she was a volunteer with the U.S. Sanitary Commission during the Civil War and did much with the training of nurses. These letters run through four years of Roosevelt's presidency and the first four years after he left office. Some of the most interesting come from 1912 when Roosevelt was contemplating another run for the presidency against his hand-picked successor, William Howard Taft. They provide an insight into Roosevelt's feelings about Taft. Schuyler cautioned against the run, encouraging Roosevelt to wait until 1916, fearing (correctly) that 1912 would be a Democratic year. The former President explains that he has two choices, to declare he would accept the nomination of the Republican Party, or refuse it. He chooses to announce he would accept, not for his own interests, but because he feels it would be in those of the country. Writes Roosevelt on February 20, 1912, "Under no circumstances would I be for Taft's re-nomination. He is a reactionary, not primarily by preference, but simply because he does not understand the great questions that are up, and has no real convictions on them. He was an admirable lieutenant, but as a general he is utterly incompetent. If he should be nominated and elected, it would merely make the Republican Party a reactionary party, and not a particle more useful to the country than the Whig Party under Millard Fillmore. Under such circumstances I cannot support him for the nomination, even though as a choice of two evils it may be and doubtless will be necessary to support him against the Democrats if nominated…"

Of course what happened was that the Republicans nominated Taft anyway, but rather than accept the lesser of two evils, Roosevelt attempted a third party candidacy, beating out Taft, but losing to Democrat Woodrow Wilson. But, perhaps Roosevelt's unkindest cut at Taft was comparing him to Millard Fillmore. Ouch! In a letter on December 31, after the election was over, Roosevelt looks back on the election, and then comments, "Indeed I did not mind being shot a bit." Only T.R. could make such a statement. On October 14, a deranged gunman fired a shot at Roosevelt while traveling to a speech. The bullet struck him in the chest, but its full force was slowed by the thick manuscript of the speech in his pocket. Despite the injury, Roosevelt insisted on going ahead with the talk, and waved the speech with its bullet hole in front of the audience. Despite his attempt to avoid medical attention, he was finally forced to undergo hospitalization the next day. Doctors decided not to remove the bullet, and Roosevelt carried it within him the rest of his life. The sixteen letters are priced at $27,500.