Custer and the Old West from Old West Books 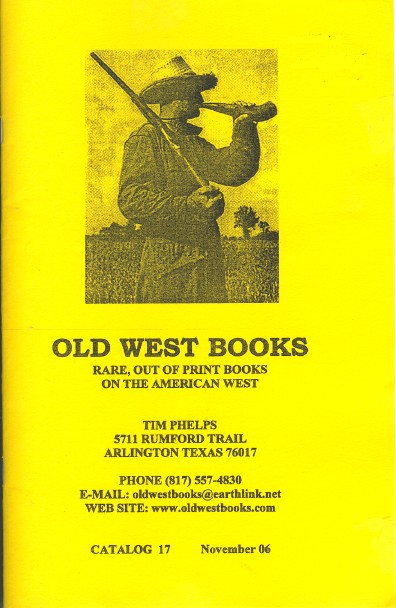 Custer and the Old West from Old West Books

We recently received our first catalogue from Old West Books of Arlington, Texas. For those not up on Texas geography, Arlington is a compromise between Dallas and Fort Worth, home of the Arlington Rangers baseball team, and future home of the Arlington Cowboys football team (though Arlington does not receive proper credit). Anyway, if Arlington today typifies the new west, it was once in the heart of the old, and a most logical place to look for memoirs of the time. Old West's Catalog 17 offers 336 books, some as old as the Old West, others of a more recent vintage but still about days past. All pertain to the era of Cowboys and Indians.

The catalogue is broken into three sections. The first is Custer, that unfortunate warrior who is remembered almost entirely for dying. The second is headed Native Americans, Indian Wars, Military. The final section is Lewis and Clark. For those who collect, or with an interest in America left of the Mississippi, this catalogue will lead you down many happy trails. Here are a few samples.

It has long been said that no one from the 7th Cavalry escaped Custer's Last Stand, but that is not true. Surviving to bear witness to this terrible massacre was Comanche, the horse of Captain Myles Keogh, one of the many cavalry humans who did not survive. Comanche had proven his mettle under battle numerous times before, withstanding arrows and other injuries to lead his rider into combat again and again. This time, Keogh didn't make it, but the badly wounded Comanche was found wandering the battlefield two days later by army troops. He was nursed back to health and became a symbol to both the army and the non-native population of America in general, seeking heroes for its wars against the Indians. Comanche was retired, never to be ridden into battle again. He would lead an occasional parade, was given the honorary title of "Second Commanding Officer" of the 7th Cavalry, and reportedly developed a fondness for beer, in which his fellow soldiers indulged him. Comanche lived another 14 years, dying at the ripe old age (for horses) of 29 in 1890. His body was stuffed and displayed at the famous Columbian Exposition in Chicago in 1893. His preserved remains were then returned to the University of Kansas museum where they are still on display today. In fairness to accuracy, it should be noted that Comanche was not the only cavalry horse to survive the battle. Others who survived in better shape were taken by the Indians. Item 6 is the biography of this once famous horse, Comanche The Horse That Survived The Custer Massacre, by Anthony Amaral, published in 1961. This copy is a first edition, signed by the author. Priced at $140.

A messy scandal in Washington almost saved Custer's life, and would have but for his protests. War Secretary William Belknap was one of the most egregious violators of the public trust during President Ulysses Grant's scandal-ridden administration. Belknap traded appointments in the West for cash. The luxurious lifestyle of his wives (he had two while in office, but don't worry, they were not his wives at the same time) led to great suspicions.