Oddities and Eccentricities from Garrett Scott 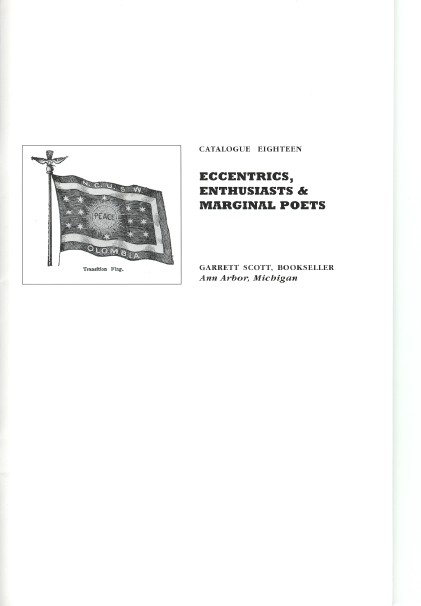 Oddities and Eccentricities from Garrett Scott

We receive many exciting catalogues here at the Americana Exchange, but none are more fascinating than the occasional collection that crosses our mailbox from Garrett Scott, Bookseller, of Ann Arbor, Michigan. These catalogues are not the most artistic we see. The books offered are not among the classics of western civilization nor world culture. The authors are not the great writers of this time or any other, nor are they highly regarded historians, scientists, teachers, preachers, or anything else. These works did not change the thinking of mankind. There is probably nothing in here that can be described as "important." You never heard of these works or their authors for good reason. Still, there is one positive term that can be used to describe these writings - "original." This catalogue is filled with the thoughts of original and creative writers, both ahead of and behind their times. Rationality and common sense never posed a limitation to their creative thinking. Within this catalogue, you will find ideas you have never encountered, such as will stretch your imagination beyond the boundaries of good sense, taste, rationality, and every other such artificial barrier we tend to place on creative thinkers.

The title of Scott's 18th catalogue is Eccentrics, Enthusiasts and Marginal Poets. That is a good title for this group, though perhaps "marginal" is a euphemism for "bad." This is a collection of bizarre, but eminently entertaining, titles from 19th and early 20th century America. Much of it is quite rare, as many of these authors could only make it into print by self-publishing their works. All were earnest in their beliefs, generally more so than those with more conventional ideas. This is a catalogue anyone who collects oddities must have, but it will appeal to those with predictable collections as well. Many touch on local issues or contain imprints of small communities. For example, Peoria collectors will read about turn of the century local personalities in Richard Burt's War Songs, Poems and Odes by Captain R.W. Burt, a poet little remembered for good reason. What collection of planetary astronomy would be complete without Vodisa and Willard Magoon's Willard M. Magoon, Psychic and Healer? Magoon informs us, after an out-of-body journey to Mars, that the Red Planet's natives "had their electrically driven automobiles long before horseless carriages were thought of on earth and they had powerful long radios long before Marconi was born." Or, for those who collect the who really wrote Shakespeare controversy, there is Man v' Ape in the Play of Ear-Ce-Rammed, by Philip Samuel. Along with digressions about evolution, Samuel comes down on the side of Francis Bacon. He was in a position to know, for Samuel was Bacon reincarnated. Honestly. Here are a few more.