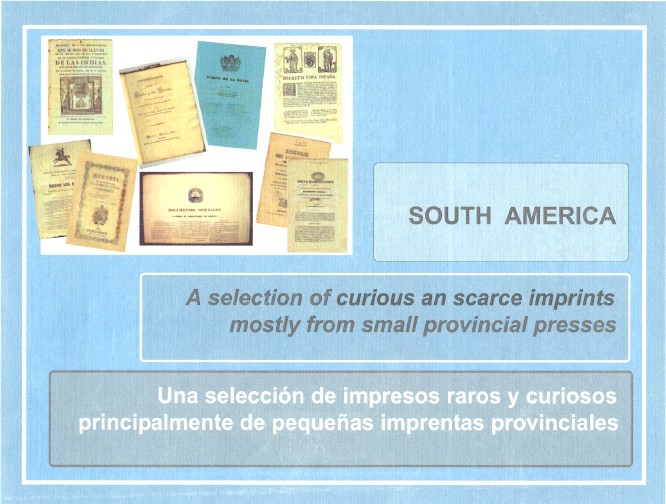 Libreria de Antano of Buenos Aires has released a most interesting and unusual collection: South America -- A Selection of Curious and Scarce Imprints Mostly from Small Provincial Presses. There aren't many items you will recognize here, although people with an interest in early Latin American history will know the topics and conflicts described. The internal issues south of the U.S. border may not have regularly penetrated consciousness north of that line, but there was a vibrant history being played out across the southern continent. Small pieces of that history are captured in this list.

These items were written in the Spanish language. Fortunately for this reader, Libreria de Antano also provides descriptions in English. We cannot provide prices as they are not listed. Here are a few samples of these "curious" items:

A 1679 edict from the King of Spain ordering the liberation of Indian slaves, as well as their children and descendants. African slaves did not yet fare so well, but it was a start.

The American Revolution opened the door to greater free trade in the Americas. However, this did not eliminate such issues as smuggling on the seas and land. This 1786 document prescribes rules for impounding and later distributing contraband seized from smugglers.

In the time of Napoleon, the Spanish King was seriously weakened and even detained by the French. This circular issued by councilmen from Mexico City in 1808 proclaims their loyalty to the Spanish King. The Mexican people may have been loyal to Spain vis-a-vis the French, but the first attempt at revolution by the indigenous people would come just two years later, and the final overthrow of Spain about a decade after that.

In the 19th century, two-thirds of Mexican cropland was devoted to growing corn. This 1851 report, published in Chile, tells about the origin of corn, its history, cultivation, and other information.

If your preference is peanuts, there's an item on peanut growing in America. It provides historical and botanical data about a plant that was little known at the time (1800).