Some Varied &quot;Newe Arryvals&quot; From Between The Covers Rare Books 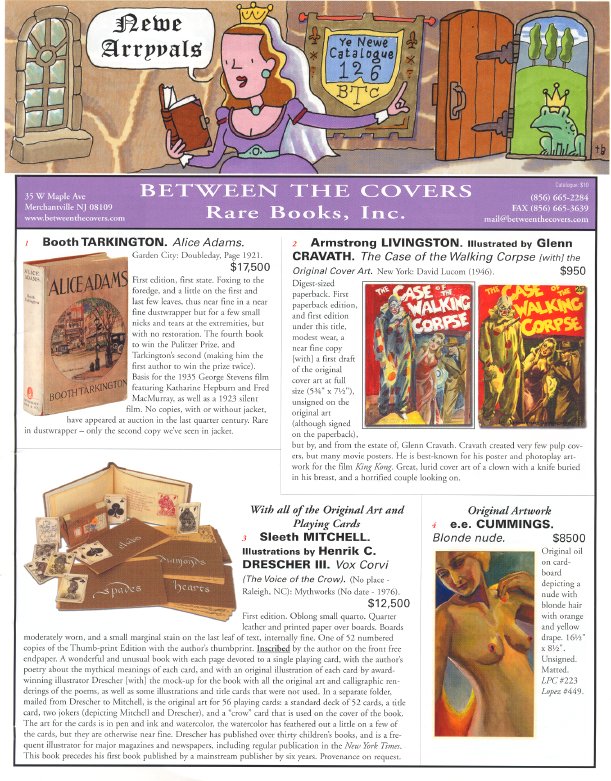 Some Varied &quot;Newe Arryvals&quot; From Between The Covers Rare Books

From Between The Covers Rare Books we have received a catalogue of Newe Arryvals. Their proofreader is going to be in deep stuff for that one! There is a mix of types here. There's some literature, some mysteries, some history, a few children's books, some sports books, and an occasional ephemeral item. As usual, Between The Covers provides a photograph of each item, maybe more, along with a description. These are always fun and entertaining catalogues, along with offering some very good books for your collection. Here are a few.

Item 50 is Gerard Manley Hopkins: A Life, by Eleanor Ruggles. Hopkins was a 19th century transitional poet who didn't publish very much as he decided to enter the priesthood. However, it is not Hopkins that makes this book interesting. This copy was a gift to an English teacher, and it is signed by each of the members of her class for Christmas of 1944. One of those students was the future author of Class of '44 and Summer of '42, Herman Raucher. Priced at $275.

Item 11 is another school related book. It is Lindbergh the Flier of Little Falls. Charles Lindbergh was a graduate of Little Falls High School in Minnesota, and the year after his historic transatlantic voyage of 1927, the classes of 1928 and 1929 published this tribute to their illustrious alumnus. This tribute comes in stapled blue wrappers and includes some local and news photographs. $150.

Just forty years after Lindbergh stunned the world by flying across the Atlantic, astronauts were circling the earth from space. But that was a very dangerous business. Item 6 is Gemini: A Personal Account of Man's Venture into Space, by Virgil "Gus" Grissom. Grissom died in 1967 when fire broke out in his capsule while running a simulated mission. $350.

We generally associate Carl Sandburg with Lincoln and poetry. Here is his more practical side: How Commonwealth Edison Stings The People With High Prices. Electricity prices were high when this small handbill or broadside was published (circa 1913-15), though probably not as high as today. It is not signed, but Sandburg included it with another small broadside identified as his, which he sent to a friend working on his bibliography. Sandburg had worked for the Wisconsin Social Democratic Party before returning to Chicago to pursue journalism and poetry, so this attack on Chicago's power company fits in with his views. Between The Covers notes that this is a rare, and possibly unique, Sandburg item. $1,000.