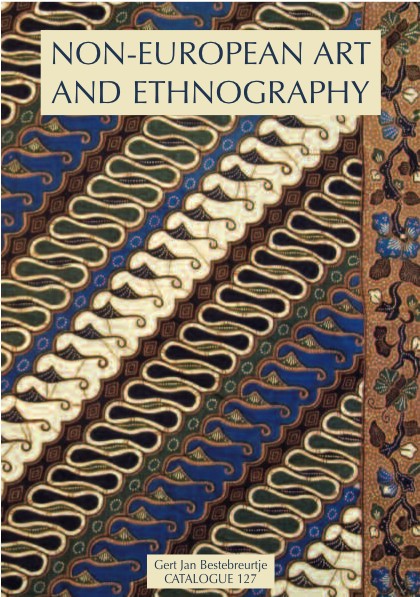 The newest catalogue from Gert Jan Bestebreurtje Antiquarian Bookseller and Printdealer of the Netherlands is entitled Non-European Art and Ethnography. For those unsure of the term "ethnography," it is focused on the detailed study of a particular group or tribe, usually through field study. "Ethnology," on the other hand, is more of a comparative study, perhaps comparing the results of ethnographic studies of differing groups. Hope this helps.

As suggested by the title, there is not much about Europe in this catalogue, though Europeans wrote many of the books. Africa and Asia are the focus of most works, though there are some pertaining to the Americas. As you might expect of Europeans doing ethnographic studies, the works mostly are about "native" peoples, so we see studies of American "Indians," but not many of European settlers of the Americas. Europeans generally never quite saw themselves as being part of a "tribe."

There is no shortage of books available in this catalogue. There are a total of 724 items, and for those watching their expenditures, this is not a collection of expensive material. Very few items exceed $100, with most being significantly less. For 19th and 20th century looks at various "native" populations as seen through the eyes of westerners, this is a most interesting catalogue. Here are a few items.

This 1898 book has been described as one of the best ever ethnographic studies of the Tonga Tribe of Southeast Africa. The title is The Life of a South African Tribe, by Henri Junod. First published in French in 1898, this two-volume (1912-1913) issue is the first enlarged edition in English. It presents a look at the Tonga in the years before the 20th century would bring enormous changes to the region. Item 340. Priced at €450 (Euros, or U.S. equivalent of approximately $573).

Item 314 presents a look at America's natives or "Indians" as of 1919, a few decades after the last attempt by those peoples to maintain their independence militarily. The title is The Red Man's Continent. A Chronicle of Aboriginal America. The author was Ellsworth Huntington. Huntington was a well-respected Yale University professor who was known for his studies of the effect of climate on civilizations. He was also cognizant and wrote about the causes of climate change, a topic of much greater interest today than it was then as we contemplate the effects of global warming. €45 (US $57).

Here's an even earlier American work, and one that does tell us about European settlers: Colonial Folkways. A Chronicle of American Life in the Reign of the Georges. This can't refer to the Bushes since it was published in 1919. Therefore, we will assume author Charles M. Andrews is referring to the first three British kings named "George." They reigned from 1714 until well after the American Revolution, when America replaced a king named "George" with a president by that name. This title was part of "The Chronicles of America" series published by Yale University. Item 10. €45 (US $57).