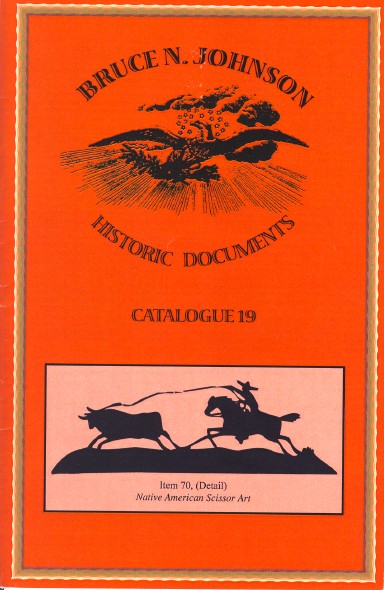 Bruce N. Johnson, of upstate Liverpool, New York, has issued his first catalogue of Historic Documents (catalogue number 19 overall). This one is filled with manuscript and ephemeral items, and they are truly historic, fascinating, and very collectible. There are numerous broadsides, maps, and photographs, although we will specifically focus on some of the manuscript letters. Johnson has many that were written by ordinary people, but ones who were witnesses to some amazing events. These are the words of people who were quite literally eyewitnesses to history, and their letters will make you almost feel like you were there. Here we go.

This letter was written from Berkeley, California, on April 19, 1906. The previous day was that of the great San Francisco Earthquake. "Yesterday morning at 5:15 we had the hardest earthquake in the history of California. I tried to get out of bed but was tossed from one side to the other...Of course everyone was panic stricken." The writer takes a boat from Oakland to San Francisco, where he observes, "for an area of several square miles the whole city was a mass of flame. The entire water front had burned down in the forenoon." He goes on to say, "Market St. the principal street of the city is simply ruined not a building is left standing for nearly two miles..." He notes that the water mains had burst, so there was no water to fight the fire. "...the Fire Marshall began blowing up buildings with dynamite in hopes of saving the remainder of the City whole blocks of beautiful great large brick buildings were blown down but the fire would jump over." This was in reference to authorities' attempts to create an empty space between the fire and the remainder of the city by blowing up buildings, sort of like back-burning to stop a forest fire. "People by the thousands were sitting on the curbs on the pavements and the Parks are crowded... They are bringing thousands away on every boat and train." This astounding 3 1/2 page letter is item 48. Priced at $975.

Though perhaps better known, the San Francisco Earthquake was a minor event compared to the tragedy which unfolded on the island of Martinique a few years earlier. In May of 1902, a volcano blew out the top of Mount Pelee. Tons of hot ash descended on the town of St. Pierre. Within a matter of minutes if not seconds, virtually the entire population of 29,000 was dead. There was but one survivor, deep in the basement of a jail. The author of this 16-page letter to his mother was evidently a young newspaper reporter in a steamship out at sea. He notes that even five miles out to sea, his ship was covered with a quarter inch of dust. He first describes entering the neighboring city of Fort de France, where residents feared the same fate would befall them. He then proceeds to St. Pierre. "...we were all alone in the city with forty thousand dead bodies laying about us......In trying to go through the streets we would every once and awhile we would step on the burned and charred body of some human being....The people were laying dead where they had stood at five minutes before eight on the morning of May eighth. Women with children in their arms were seen, as if they had been trying to protect the little ones...They [authorities] had started to pour kerosene over the bodies that were lying loose, and setting fire to them..." This letter to Mrs. Reynolds in Rochester, New York, is item 49. $1,850.