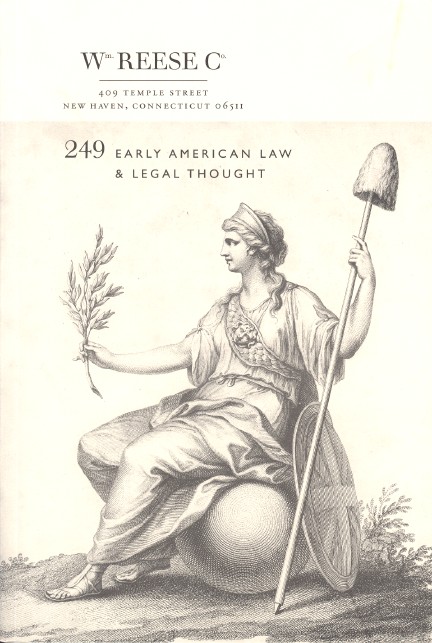 The William Reese Company recently issued its 249th catalogue, this one titled Early American Law and Legal Thought. Most works are from the late colonial period to the pre-Civil War era, or roughly 1750-1850. The types of documents vary, from federal and state founding laws to trials for gruesome murders. Of course, the latter makes the most interesting reading, though the former are undoubtedly more important. There is a routine legal document from 1850 in the hand of attorney Abraham Lincoln (imagine, the first Republican president was a...trial lawyer!). There are Indian treaties and Confederate laws, an account of the trial of former Vice-President Aaron Burr and the impeachment of President Andrew Johnson, a sensationalized account of Utah's Mountain Meadows Massacre and a Lincoln biography by his law partner. Here are a few of the other works you will find in Reese's legal catalogue.

Back in the day, the United States government was interested in paying down its national debt, rather than expanding it. The fledgling nation and its states had been forced to borrow money to conduct its revolution. Now free and independent, its leaders, notably Treasury Secretary Alexander Hamilton, wanted to establish the nation's creditworthiness and financial stability. While Hamilton and Thomas Jefferson differed on many things, they agreed on the importance of paying the country's bills. Item 80 is a copy from 1790 of ...An Act Making Provision for the Reduction of the Public Debt. Known as The Public Debt Act, it provided for certain duties that were raised to be used to pay down the national debt. This copy bears the signature of Jefferson, attesting to the authenticity of the bill in his role as Secretary of State. Priced at $55,000.

Item 108 is a very interesting manuscript tying together George Washington, John Marshall, and the Lees of Virginia. John Marshall was unquestionably the most important Chief Justice ever of the U.S. Supreme Court. He was also a biographer of Washington. His Life of Washington is generally regarded as the definitive biography of America's first president. This item is a long letter from Marshall to Henry Lee IV in 1833. Lee spent much of his life defending the reputation of his father, "Light Horse" Harry Lee, a comrade-in-arms and favorite of Washington who years later found himself imprisoned for debt. Marshall responds to some suggestions/criticisms Lee had made in an earlier letter. Henry Lee IV is an obscure figure now, but almost everyone is familiar with his brother, Robert E. $15,000.

Item 176 is an 1832 printing of American-Indian treaties: Laws of the Colonial and State Governments, Relating to Indians and Indian Affairs, from 1633 to 1831... The timing is most ironic. This was published at the time pressure was first being placed on the Cherokees to leave their ancestral home in Georgia for the more barren territory of Oklahoma. The period covered, up to 1831, was when America, for the most part, honored its treaties with the Indian nations. Going forward, the nation would ignore virtually all of them. $1,250.