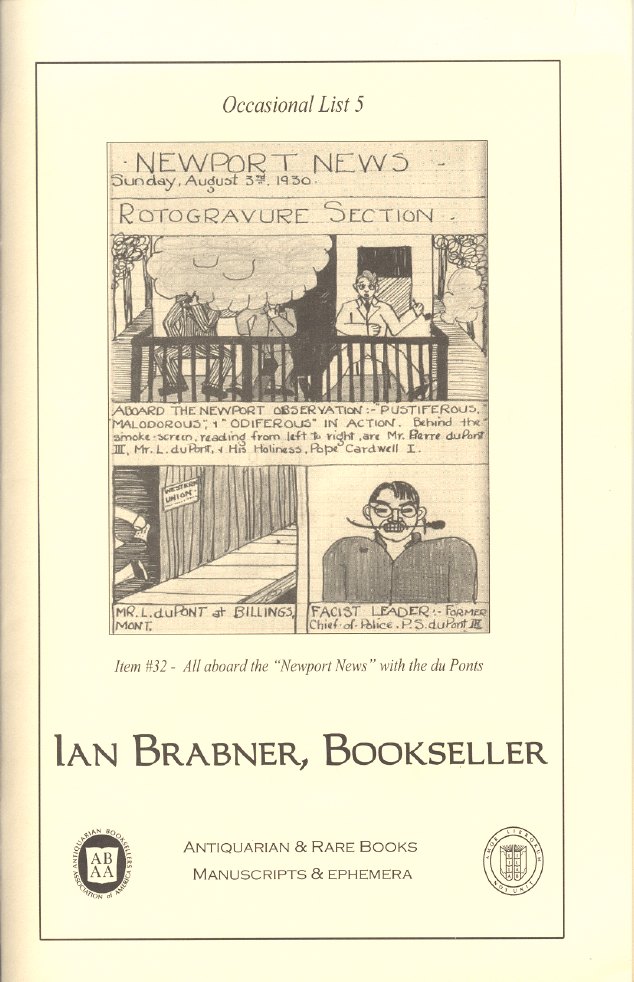 Ian Brabner, Bookseller, of Wilmington, Delaware, has issued a fascinating collection of eclectic works, Occasional List 5. There is no way to classify this grouping. It is filled with the odd, the uncommon, the mundane, and something for everyone. There is a concentration of 19th century material in this catalogue. That is about as close as I can come to picking a common thread. However, I can promise this catalogue will be fun to peruse, and much of the material you will want to read out of curiosity, even though these are collectibles. So, all we can do is present a few samples of what we found, with the caution that this is both not particularly representative of what is in this catalogue, and yet in another sense, it is totally representative of this diverse collection.

Item 30 is an anonymous circa 1870s broadside, perhaps published by a pair of aggrieved Iowa sisters. The heading states, An Incident of the late War -- The Brutal Burial of a Dead Soldier. The dead soldier was James McDannel, the sisters' brother, and the brutal undertaker J.W. Johnson, a government undertaker given the job of burying the wounded veteran when he died shortly after the war. Evidently, a dispute broke out between the undertaker and the sisters over the quality of the casket. The sisters were expecting an upgrade over what Johnson planned to bury him in. According to the sisters, Johnson had not yet dug the grave when he arrived for the burial. Apparently, there must have been an unresolved disagreement over the coffin, so Johnson went off to get another body that needed to be buried that day. They also said that Johnson borrowed their carriage to attend another funeral, which makes one think the situation was not as contentious as the sisters later described. Otherwise, why did they loan him their carriage? When Johnson returned, there was another disagreement over the coffin, whereby, according to the sisters, Johnson threatened to "throw the body on the ground and take his coffin back." Tacky, Mr. Johnson. Next, the undertaker took off for yet another funeral, again borrowing the sisters' carriage. All of this happened years earlier, but either they harbored a permanent grudge, or something else came up which led to the publishing of this attack several years later. As the sisters explain, "Years have passed by with the wave of time -- but in the hearts which once loved, can never forget 'THIS MONSTER IN HUMAN SHAPE,' though he still lives and continues his devotions at the Altar of God and continues to still bury the DEAD." Today, we would not publicly display such disagreements in broadsides. We would do it on reality TV, like we should. Priced at $200.