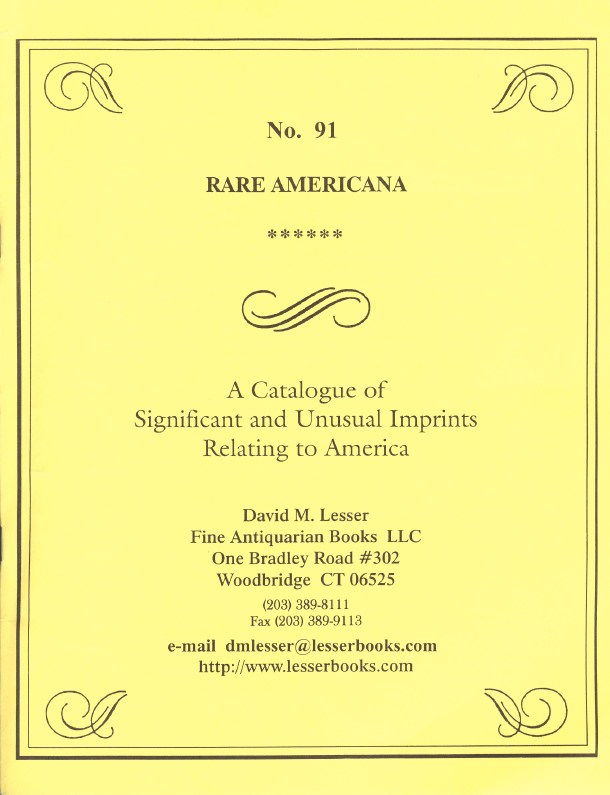 David M. Lesser Fine Antiquarian Books recently released their 91st catalogue of Rare Americana. Those familiar with Lesser's catalogues will find no surprises. Somewhere he manages to come up with books and pamphlets, primarily from 18th and 19th century America, which reflect their times better than the material of perhaps any other bookseller I have seen. Rather than founding documents of a nation, or major proclamations, Lesser offers the pamphlets of politicians of the day, sermons from preachers battling yesterday's demons, personal disputes carried into the public arena, stories of gruesome crime, and, dominating the period between the Revolution and Civil War, are the debates over slavery. Reading a Lesser catalogue is looking through a window on early America as it really was, not as we might like to imagine. Here are a few samples of this material, but you really need the entire catalogue to appreciate the views Lesser offers.

Georgia's Civil War Governor Joseph E. Brown was something of a flame-throwing character. First elected in 1857, he was not the first choice of the planters, but was still an ardent supporter of slavery, while also championing the poorer whites. He was a leader in the state's secession movement after Lincoln's election, but as the war began to evolve, he became a bitter opponent of Jefferson Davis and Confederate power. He resisted such activities as the Confederate draft and impressments of goods and slave labor. Some believe that Brown took his states' rights positions so far that he hindered the Confederacy's war effort. Brown also established effective public assistance programs considering the dire circumstances the state found itself in as the war dragged on. Item 18 is an example of his leadership in this area: Message of His Excellency, Joseph E. Brown, to the General Assembly...March 25, 1863. In it he calls for a prohibition on planting "excessive" cotton so that food crops can be grown. However, he goes on with some hyperbole over the war to ask, "How can we again shake hands with [the Unionists] over the slain bodies of our loved ones, and again embrace them in fraternal relations? Sooner than reunite...let us submit to the devastation of our fields, and, if need be, the extermination of our race." Brown would answer his own rhetorical question after the war, as he allied himself with the so-called northern "carpetbaggers," and for awhile even joined the Republican Party. Returning to the Democratic fold after Reconstruction, he served in the U.S. senate from 1880-1890. Priced at $600.

Most people know Cassius Clay only as the birth name of the boxer who later changed his name to Muhammad Ali. However, that name was one which had been passed down in his family for generations, and there was a reason his ancestors had adopted it. The original Cassius Clay was an ardent opponent of slavery from a border state in which such views were not designed to win friends. Like the boxer, this Clay was from Kentucky, but he was born in 1810, was a cousin of the famed politician Henry Clay, and served in the state legislature (his views were not conducive to higher elective office). He would serve as Minister to Russia during the Lincoln and Johnson administrations where he played an important role in the purchase of Alaska.