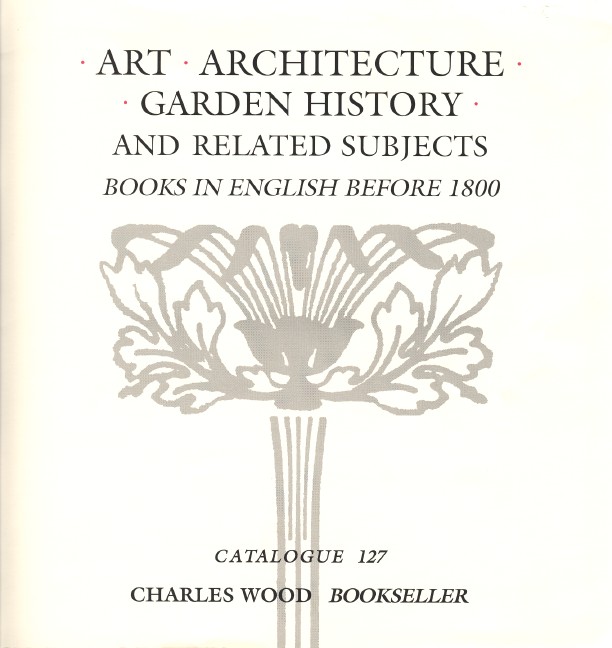 Just released by Charles Wood Antiquarian Booksellers is their catalogue 127: Art, Architecture, Garden History and Related Subjects. Books in English Before 1800. Since there were not a lot of architectural and related texts being published that early in the rest of the English-speaking world, it is a safe assumption that these books carry British imprints. Wood may come from Cambridge, The New World, but these books come from the environs of the Old World Cambridge. Not that all were originally in the English language. There are numerous books first published on the continent, which only made their way to English via translation. Nevertheless, this catalogue is filled with books that made their mark in both the new and old worlds, some having appeared in the libraries of notable Americans such as Benjamin Franklin and Thomas Jefferson. They remain appropriate to libraries on both sides of the Atlantic today, though perhaps more as collectibles than tools for practical use. Then again, artistic design never grows old, so designers may find some ideas still worthy of emulation today. Here are a few of the books Woods has to offer.

This is an example of a book that worked its way from Paris to London and then America. The title is Fires improved: or a new method of building chimneys, so as to prevent their smoaking... Originally published in Paris in 1713, this is the first English edition from 1715. The book describes improvements in chimneys designed by author Nicolas Gauger which would provide the starting point for Benjamin Franklin's Pennsylvania or Franklin stove. Franklin recognized Gauger's work for its influence on him, and it is likely that this 1715 English edition is one the American inventor read. Item 35. Priced at $1,500.

Item 32 presents Franklin's findings on the subject. The title is Observations on smoky chimneys. Their causes and cure; with considerations on fuel and stoves. This is a third British edition, published in London in 1793. Franklin was, so to speak, a master electrician and heating contractor of his day, along with being just about the most important statesman of Revolutionary America. $1,100.

Here is a book that comes with the most cogent of criticism from Samuel Pepys. Sir Balthazar Gerbier wrote this book, entitled The first and second part of counsel and advice to all builders for the choice of their surveyors, clerks of the works, bricklayers, masons, carpenters and other workmen therein concerned. At one point, the overly generous Gerbier dedicates the book to 38 different people. This was too much for Pepys, who apparently did not like the book anyway. Pepys bitingly remarks that the book is dedicated to "almost all the men of any great condition in England, so that the epistles are more than the book itself; and both it and them not worth a turd, that I am ashamed that I bought it." Hopefully, if you buy this book, you will not feel the same as Pepys. Item 36. $2,600.