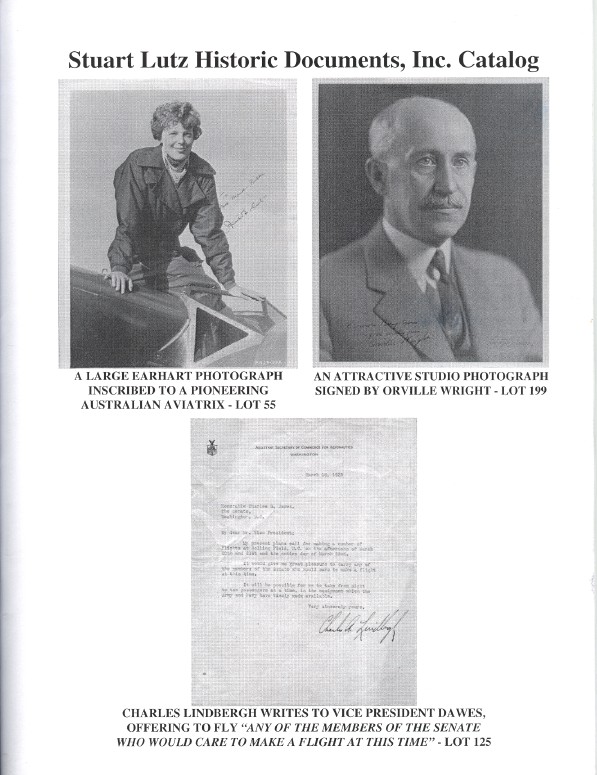 Stuart Lutz Historic Documents has issued a new catalogue of over 200 manuscripts and other signed documents and photographs. The catalogue does not appear to have a title, and perhaps that is because it covers more ground than can readily be described in a few words. These are primarily American, as in United States, items, though there is an occasional Canadian, English (often American Revolution related), French, and even Chinese, Peruvian, Sri Lankan articles. Dates range from an early 17th century Peruvian manuscript to late 20th century signed pieces by people still with us (and still signing) today. While everything in this catalogue will be of interest to some autograph collector, there are many that pertain to specific events which will be of interest to other collectors. Certainly some are of less than consequential matters, such as Warren Harding trying to collect his speaking fees, William McKinley appointing a postmaster, or Louis Armstrong's order for lip salve (okay, this one is important -- he couldn't have played without it). However, William Tecumseh Sherman's comments on the handling of President Garfield's assassin is fascinating, and the signed photograph of Martin Luther King with his associates at St. Paul's in London is notable as it was taken while he was on his way to Oslo to pick up the Nobel Peace Prize. Let's take a look at a few the items here offered.

The aforementioned General Sherman expressed his strong beliefs in the process of fair trial after the assassination of President Garfield, although he seems to have already made up his mind without waiting for an unbiased verdict. Writing to Mrs. C. Augusta Hooper, he states, "Because Guiteau committed the greatest crime of modern times and deserves to be tortured, torn limb to limb yet the soldier's duty is to protect him till trial, convicted and executed in the manner prescribed by law." He notes that "Guiteau will be punished with death by hanging after a full & fair trial." Don't you have to have that "full and fair trial" first before you decide what, if any, punishment is appropriate? The circumstance of this letter was an apparent attempt on assassin Guiteau's life by a soldier named Mason assigned to guard him. Sherman says he will not be involved in any charges against Mason because he considers the soldier's action, though wrong, something to be handled by his subordinates. In other words, he bows out of the case by saying he does not want to imply that an attempt on the assassin's life is worthy of much concern. Having said that the assassin deserves be torn from limb to limb, but will be tried instead, Sherman says, "This may seem too merciful -- nonetheless it is the fact and this distinguishes civilization from Barbarism." Then, in an addition that might make Sherman as popular with women today as he was with Georgians in 1865, the old soldier tells Mrs. Hooper, "We know of course that women act from feeling and not Reason -- but the experience of centuries is that Reason is the better friend." Item 171. Priced at $1,250.